I guess I'll use this as my check list for my "Million Card Giveaway Code Cards". For those who have bought any 2010 Topps Baseball products they will have noticed that randomly inserted into the packs are these special Code cards. You visit Topps Million Card Giveaway website, enter your special code from the back of the card. You have to type it in exactly, once I typed in an "S" instead of the "$" sign and I got an error telling me either I had typed an invalid code or the code had already been used. So I guess there is no random entering of codes to see if they work. Each card on the front has a picture of a vintage player's card and on the back is the special code you use to "unlock" your giveaway card. After the codes are entered in I suppose most people will toss the cards, sell or give them away. Personally I am collecting them as a nice oddball subset. The backs of the cards are numbered with "TMC" 1 through 10. So here is what they look like. 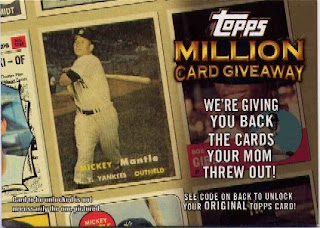 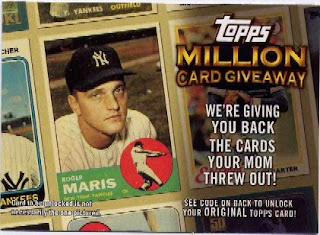 Back of TMC - 8
(code blurred on purpose) 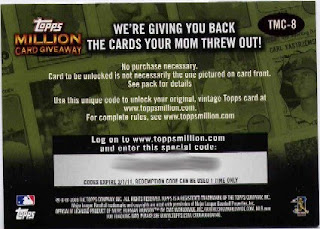 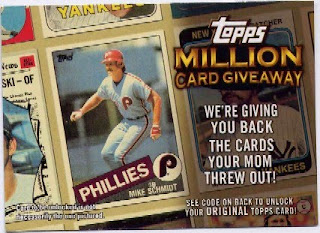 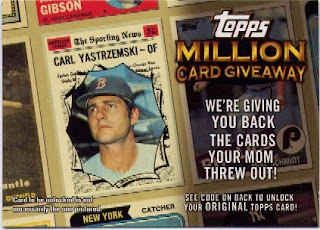 UPDATE: It is now fall (October almost November). I haven't gotten my cards because I don't have a credit card. I tried sending a message via the website, but it never goes through I always get an error while trying to send message asking about other forms of payments. This really sucks if I can't get the cards that I have unlocked because I don't have a valid credit card to pay for the frickin' postage.
Posted by CaptKirk42 at 11:30 AM