One of the relatively recent trends in the trading card world has been "cut signatures". I'm not sure which company started this madness or how long it has really been going on but basically what the card companies do is take an autograph of a sports (or entertainment) personality, cut it from it's original source be it a check, letter, autograph book or in some stupid cases an older trading card; and they encase it into, or paste it on a card. Many of these cards are also of very limited numbers. Some are 1/1 while others are serial numbered to something else sometimes the uniform number if a sports player.
When I first saw these types of things I hated them, and I still hate the idea of taking an older card cutting it and putting the signature on another card seems sort of stupid and redundant. Plus those signatures on a previous photo look really bad. I don't have any examples of cut sigs from a card in my collection to show so I'll have to borrow some examples from the internet.
Wow here is actually an example of a good cut sig from a card. If all of them were were like this Red Grange (probably from some sort of retro Hall of Fame card, or possibly a promo photo) I would have no problems. 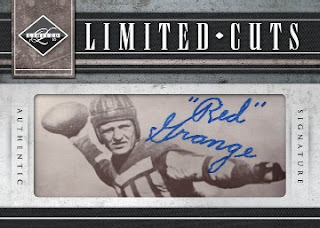 Photo from http://www.canadacardworldblog.com/2010/09/product-preview-2010-leaf-limited-football/
But alas most of the cut sigs from cards are terrible like this example from a Tucker Frederickson card from a 1969 Topps card #15. 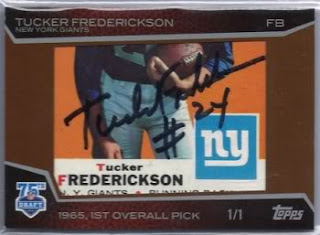 Photo from http://sportscardinfo.wordpress.com/2010/09/06/cut-signatures-and-cardboard-irony/
I will do my best to avoid getting any of these terrible poorly cut ones like the Frederickson. I have been fortunate that so far I haven't gotten any bad ones but I have gotten some really good cut signature cards and all of them were from group box breaks.
The following cards are part of my PC (Private Collection) and will most likely never be sold during my lifetime. The first two are 2007 Leaf Limited - Limited Cuts, The third one is a 2009 Limited - Limited Cuts. The Elroy "Crazylegs" Hirsch signature is from some sort of index card or autograph book, it might be from a black and white card or picture eek I don't know for sure. The Clark Shaughnessy autograph appears to be from a check as is obviously the Sammy Baugh auto. These are my three fave cut autos I've got. I think they are the only ones I've got right now, wait I might have a baseball signature lost in my collection that I haven't yet scanned.
2007 Leaf Limited - Elroy "Crazylegs" Hirsch 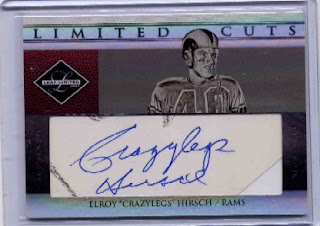 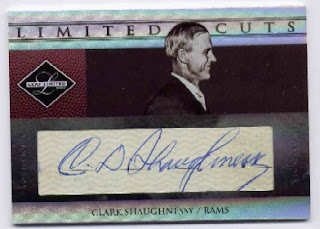 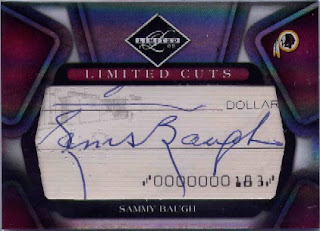