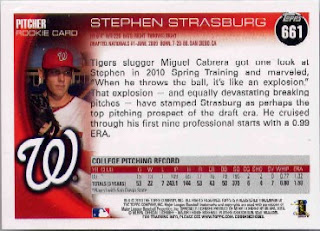 The Number One Draft Pick Rookie Phenom who made his MLB debut on 08 June, 2010 throwing 14 strikeouts  for the Washington Nationals, Stephen Strasburg gets his rookie card in the 2010 Topps Update set with several variations. The card was first available only as a giveaway for Topps "Million Card Giveway". Card Number 661 in the set has at least three different versions. The first being the MCG card I just mentioned, then version A which I think I have. This card has the same photo as the MCG card with the exception of the RC logo being on the left instead of on the right. The second version the "B" version has a different picture. A 4th variation is the "Pie In The Face" with Stephen wearing a shaving cream face pie and the infamous Silver Elvis Wig that the Nationals use for this occasion. I think a 5th variation is in the Factory set, but that I think is stamped "factory set" on the card and has yet another different picture. Then things get more confusing because the Topps Chrome set has more variations. I think those cards have different numbers though and I am not concerning myself with the Chrome junk. 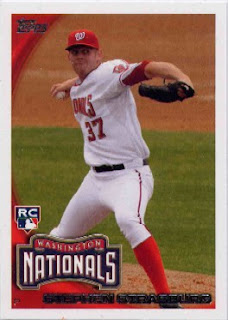 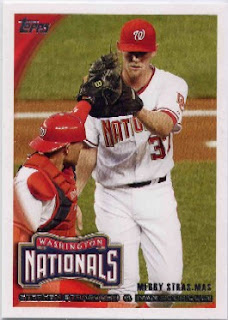 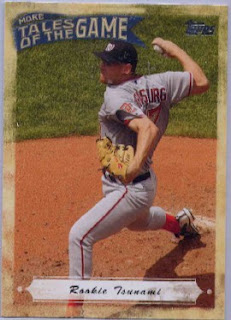 I will refer to this post in the future if I have to update any of my info on the Infamous card number 661 and it's Million Variations.
Posted by CaptKirk42 at 12:00 PM