1960 Topps Les Richter Rams among others.

I recall the first time I saw a 1960 Topps Football card was an old Redskins card I've got. It was not the first card I recall ever owning, that might have been my 1965 Topps Baseball Ernie Banks (not sure though). I don't recall where it was dug up from, probably my oldest brother had it and I found it in our basement laundry room that doubled as a storage room for almost half (or more) of the 44 years my family owned the house I grew up in.

That first 1960 Football card was number 123 Ralph Guglielmi  in horrible shape with loads of creasing and rounded corners, it has some tape holding it together at one of the creases. The very epitome of a poor grade card it barely serves as a filler card in my collection. It apparently is also an uncorrected error card as the front has his last name misspelled as Gugliemi. I will probably never get rid of it though. I always remember it as being in horrible shape. I think at one time it was taped to a notebook or inside a binder. As a kid I did that frequently to some cards. I even marked my cards with a huge "K" sometimes on the front sometimes on the back. So this one might have had the "tape to the notebook cover" treatment.


123 Ralph Guglielmi Redskins
My Original card (front then back) 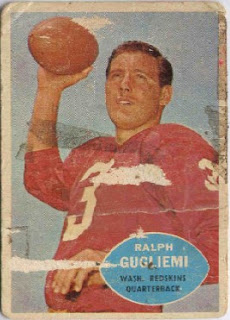 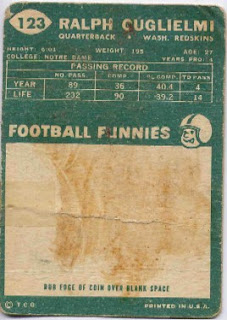 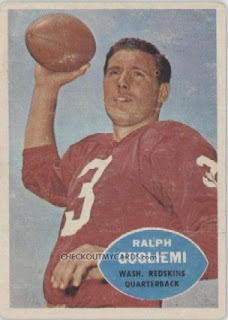 This copy of the card I do not own.
(Image from Checkoutmycards.com)

I like the 1960 Topps football for the simple colored football nameplate, and the "Football Funnies" cartoons on the back that Topps used to do back then. The downside to the cartoons though is they were coin scratch-off things that were only revealed when you rubbed the area with a coin. This made the picture appear but did damage to the back of the card. 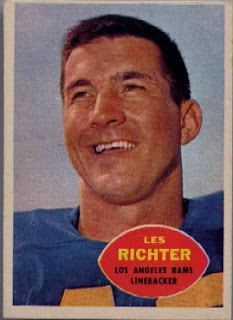 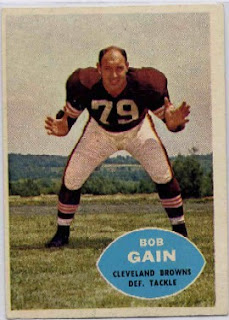