I got a few 1954 Bowman Football Cards from the Bay (Ebay) for $5.00/each on average. The lowest was $3.00 and $5.00 was the high. The Los Angeles Rams cards I got from the same dealer so I saved on shipping.
I think part of the appeal to me on these cards is the early color photos. They seem to be hand colored from black & white photos, maybe early machine colored. I'm not a photo expert so I don't know exactly and don't really care other than I enjoy them. I also like them for the team logos.
8 Norm Van Brocklin Rams 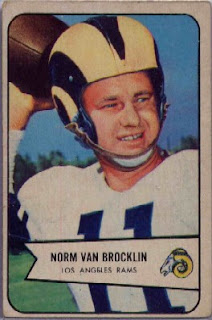 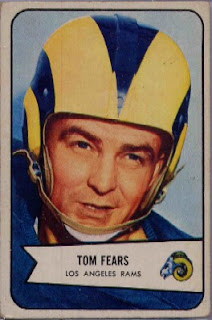 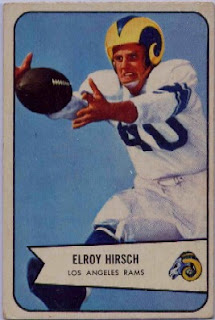 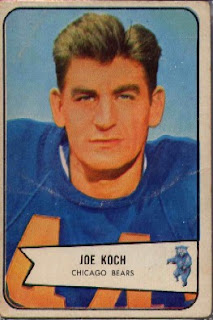 The dealer that I got the Joe Koch from also sent me a couple of  "bonus" cards. He at least was keeping with a theme as the cards he sent were Chicago Bears, although more modern ones. Some dealers send bonus cards that make no sense other than the fact that they are sometimes the same sport (I'll get into that with another post soon hopefully). The "Bonus Bears" I got were a 1990 Fleer Neal Anderson #288 (a player I collect since he has a similar name to my brother but spelled different) and a 1991 Pro Set Brad Muster #105. I'm not sure if I'm going to try to collect the rest of the 1991 Pro Set. Back in the day I had collected quite a few, but over the last few years of being a member of various trading card forums I have traded a few away. As for the 1990 Fleer. A few months back I bought a full set of them along with the All-Pros Sub-Set. So I have at least one dupe of this Neal Anderson card. 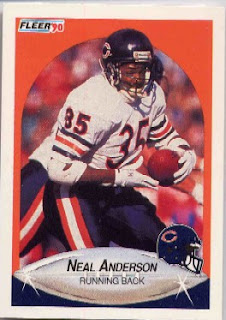