A fairly recently acquired card I got from one of my favorite players of one of my favorite teams when I was a kid. Merlin Olsen who played on the Los Angeles Rams from 1962 - 1976. His Rookie card is a 1964 Philadelphia card I don't have that one yet, but I did get this 1966 Philadelphia card recently. It has a little corner creasing action down in the lower left corner (the scan shows it a little). Just a few days before this one arrived I was waltzing through my cards and noticed I already had one. I thought it looked familiar. 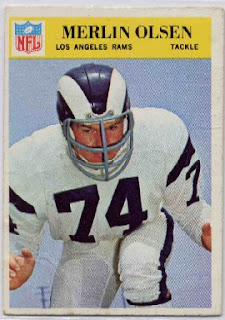 Besides the fact that he was one of my favorite players on one of my fave teams growing up I like this card for a few other reasons; His fierce look posed as it may very well be, and the way the design of the card looks like a Sports Illustrated cover.
Posted by CaptKirk42 at 12:05 AM