From Ebay I got a great deal on a White Whale card I have been looking to get. 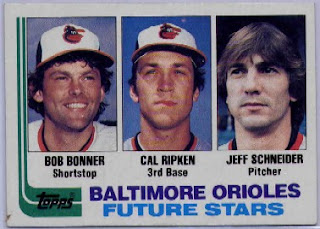 This card is often considered to be Cal's Official RC, as well as the usually more expensive 1982 Topps Traded #98T (which I don't have yet) both cards usually go for at least $20 on Ebay. 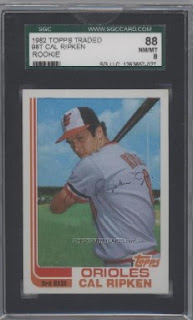 Graded 1982 Topps Traded #98T Courtesy of Checkoutmycards.com
With this card the Good/Great News is the condition is just a tad less than Excellent condition (a little flaking can be seen in the lower left corner on the front).

The Bad News is it was delivered in PWE with a forever stamp (shipping only cost them $0.44 and they charged me $1.99). OK they said "Standard Shipping" but you can send a bubble envelope and it costs about $2.00 more or less. For most sellers a bubble mailer is "Standard" especially for cards of $10 value or more (sometimes $5.00). Plus there was no Penny Sleeve or toploader UGH it was in an UltraPro "Cardsaver" (Like the pic below). 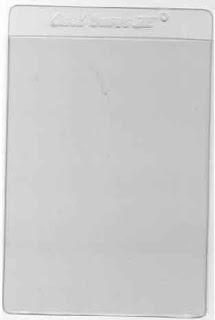 I transferred it to a penny sleeve and toploader. I dinged the seller a little on the shipping star and in the Feedback section I said "expected a little better than a PWE for the shipping", but I gave them positive feedback. If the card had been damaged from the poor shipping then I would have contacted them to try to work something out and maybe give a neutral if I was satisfied with the outcome, negative if they were uncooperative. I wonder what feedback they will give me if any?

On a side note I live in an apartment and my tiny mailbox is the one that has the lock for the postal carrier to load the boxes in my building so sometimes my mail gets extra folded because of the little extra metal bars at the top of my box. I had some packages the other day that had been bent a little good thing the contents had been protected well by their senders in those otherwise I'd have been quite annoyed at the postal service.
Posted by CaptKirk42 at 4:30 PM