One of my fave QBs of all time especially growing up was Sonny Jurgensen of the Washington Redskins. My Homie Team. here is a card I recently got for a decent price at Ebay. It is serial numbered and that was one of the selling points to it because of the connection I could make with the number. 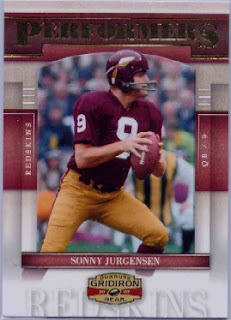 Sometime earlier I had gotten this other 2007 Jurgensen card from a group break. It is also serial numbered Bronze Spotlight card it is 32/32 an Ebay 1/1. Then it's companion common version. 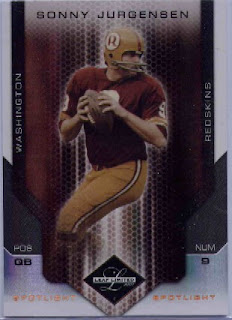 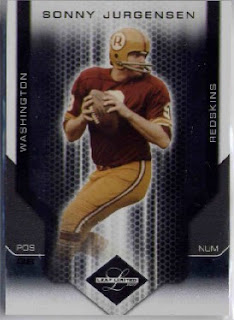 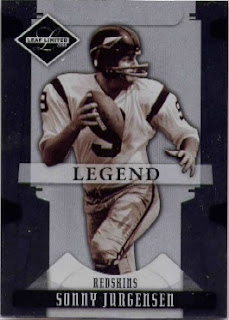 064/499
Another grab from the Bay was a special version of the 1994 Ted Williams  61 Sonny Jurgensen Card. Notice that the picture of Sonny on this card is the same exact photo as the previous 2008 Leaf Limited card. Also the faded background picture is a 1970s picture where the main picture is from the '60s. 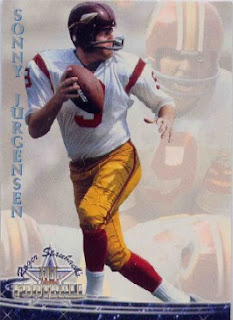 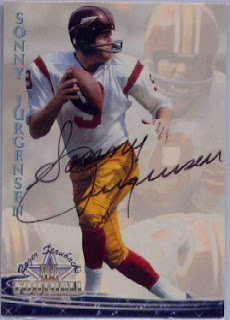 As I said I got that one from the Bay and at a good price only $5.74 +$3.00 shipping. It's not authenticated but it does seem to be consistent with Sonny's signature. The exception though is it doesn't have "HOF 83" this worried me a little, but there have been some authenticated autographs of his by PSA without the extra Hall of Fame line. I know that for every legit autograph out there there are about 1,000 forgeries. This card might not be an authentic autograph, but I don't mind. There have been cases of people getting legit autographs from celebs and then an "expert" tells them that their signature is a "fake". I have no intentions of selling or trading this card. If I ever do I guess I'll say out front that I don't for sure if the signature is authentic or not. I've gotten autographs of celebs before; Weird Al Yankovic, James Belushi, Peter Noone & Harry Chapin to name a few and those signatures are not "authenticated' maybe someday I'll get then looked at. The Belushi & Noone autos are on a program from 1982 when they performed in The Pirates of Penzance, and the Chapin auto is in a concert program, so those should be easier for an authenticator to give the thumbs up on.
Posted by CaptKirk42 at 2:00 PM