When I bought some cards recently (See post "Some Vintage Baseball") I received some bonus cards and some BONUS WAX PACKS. Now these packs are from the early 1990s the JUNK WAX years so they might not have much of anything of any real value. Two of them I'll probably sell, trade, or maybe open to see what is in them, the other I'll probably keep as is. Anyway here they are:
1990 Upper Deck Foil Pack 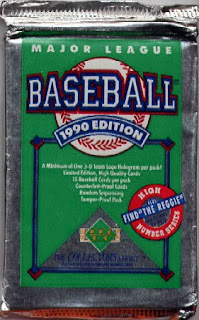 The 1990 Upper Deck Set contains 800 cards and the only key cards are the Sammy Sosa RC and a Nolan Ryan Card #734 6th No-Hitter. There are two variations of this card one with a banner that says 300th Win on bottom right corner and one without the banner. The variation 734A without the banner is rarer and apparently worth more than the 724B banner version. Fun fun fun.
1990 Donruss Wax Pack 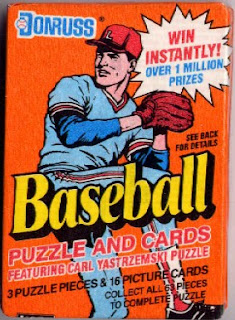 The 1990 Donruss Set contains 716 cards. As with the tradition started in 1982 cards 1-26 are the Diamond Kings subset, with card 27 being the DK checklist. Then cards 28-47 are Rated Rookies cards. Again the Sammy Sosa Rookie card in this set is a Key card as well as an error RC card of Juan Gonzalez. Oh an the Puzzle is of.. Carl Yastrzemski.
Next up is the 1989 Topps Set it contains 792 cards. Key cards are RCs of Craig Biggio, John Smoltz and Randy Johnson (I think I've got that one somewhere, or did). The kicker on this pack, and the reason I just might keep this pack and keep it sealed is it is majorly miscut. 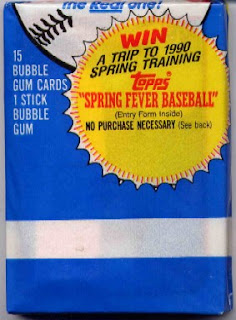 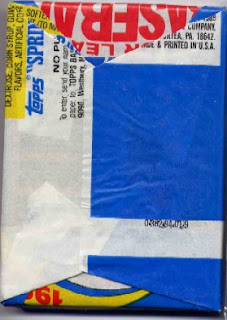 So campers and Knooknicks what should I do with these packs? If the process wasn't soo expensive I'd consider sending the Topps pack to get graded as some sort of packaging error. There are at least 2 reasons I won't the first as I said it is expensive (and you should send several items to be graded not just a single solitary pack). The second I don't like having things entombed in plastic. They grade and entomb comics as well as cards, I can understand the cards but comics? Comics are supposed to be read also, not just looked at. I like the "feel" of things in a collection, even if you put them in plastic sleeves or binder pages you still have a sense of their feel. Slab them up inside the plastic and they lose some of their character.
Posted by CaptKirk42 at 12:00 PM