When it comes to reprints, or redoing anything really I almost always prefer the Original over the reprint (remake). For me it is especially true for Trading Cards. The biggest problem of course is some of the really nice Original cards I'd like to own sell at ridiculously outrageous prices, that I wouldn't even be able to purchase a small shaving off of the corner.

As a Kid I flat out refused to have anything to do with reprints. I kept to my guns on the matter until sometime in the very late 1970s to early 1980s when I bought some "retro" "All-Time" commemorative team sets though the mail. Produced by TCMA in various years. I don't have any of those scanned right now, maybe I'll get around to some of them soon. These sets were made somewhat on the cheap and are very simple looking, but they are a great way to get cards of players from yesteryear who you normally would not be able to afford even the cut corner from an original. Now these specialty sets are not really reprints so my self rule of NO REPRINTS was still intact.

When I started discovering trading card "trading" community websites then I started getting some reprints usually from generous traders who will send any old card of your favorite team or players, even if you personally don't want those particular cards. So sometimes you need to just Nod & Smile.

It wasn't until this past May (2009) that I purposely purchased a reprint card knowing that it was one (or actually that it was a high possibility). I got the card from an auction at sportlots.com for $12 plus shipping for a total of $15 the absolute MAXIMUM I ever want to knowingly pay for a reprint card no matter what the card. The seller stated in the auction outright that they didn't know if the card was an original or a reprint so I guessed and was right that it is a reprint. I wish I knew the year of manufacture though.

The card I got was a reprint (I don't know the year of reprinting but suspect it to be sometime in the early 1980s, perhaps made for one of those trading card collection books, except the sides of the card are regular cut not perforations as some of those cards are) of the 1951 BOWMAN Rookie Card of WILLIE MAYS. The card is smaller than today's standard size card and even has some mock card ware to give the feel of an old time card: 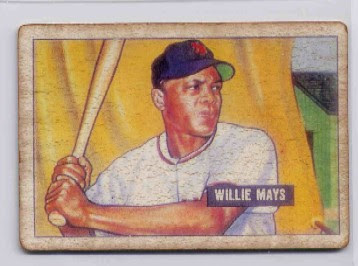 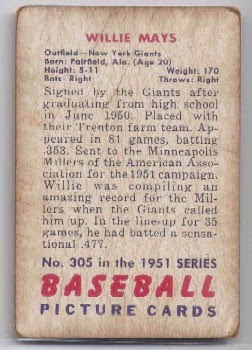 If anyone knows of possible reprint dates let me know.
Posted by CaptKirk42 at 10:01 AM