O.J. Could not have stolen this one. 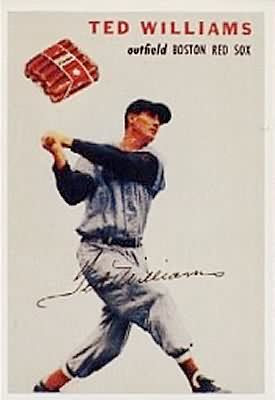 (Photo of card from http://www.vintagecardtraders.org/virtual/index.html)*
OK I'm not sure if I can do this story justice. I heard about this from a member on tradingcardcentral.com. They provided this link http://www.13wham.com/news/local/story/Stolen-Baseball-Card-Worth-Over-5-000/_ci7nvtwjU6xORSbXsa5dw.cspx. The gist is a 1954 Ted Williams card by Wilson Franks was stolen from a Canadian card collector's hotel room in NY along with 5 other cards. Before you go pointing the blame don't blame O.J. Simpson he's already doing his time for sports memorabilia theft. This is very disturbing news to hear. Here is a link to another take on the theft http://www.wpix.com/news/local/wpix-ted-williams-card-stolen,0,6362006.story

My Theory is the crook knew the guy had these cards in his Hotel room and found a time when the guy wasn't around. Maybe the thief is a card collector. I doubt that a typical Hotel employee would realize the value of vintage trading cards. The card was an officially graded card so in a way it is almost like stealing a work of art from a museum. Card grading companies keep records of the cards they have graded, and each card usually gets some sort of inventory serial number to trace its origins. So unless the thief is a collector that wants it for his personal collection (PC) or knows of a buyer to sell it on the black market, they are not going to be able to sell it easily.

*When I started this blog, I thought I would limit card images to only cards from my collection. Well I just broke that personal rule. D'oh! The image I used is a typical specimen of this card, it is not a "graded" card, those are "entombed" in plastic cases that are difficult (but not impossible as shown by some innovative card collectors) to break open without damaging the card. The news stories I linked to show a sample of the "graded" card.
Posted by CaptKirk42 at 1:37 AM