Topps Of The Class 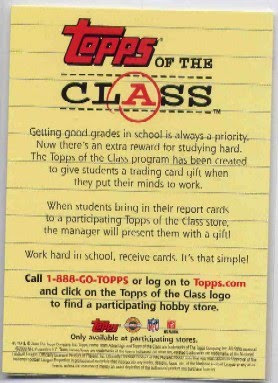 Sometime last year I guess Topps came up with an idea (uh-oh) a campaign to award students good grades with trading cards. Apparently this is in cooperation with tons of card shops across the country (USA). First the student needs to do well in school, not sure how good they mean when they say "good grades". I'm guessing it has to be at least a B+ maybe even an A-. Anyway first the student gets the grade then the student goes to a participating card shop. The list of participating card shops is online (of course) at http://www.topps.com/toppsoftheclass/index.html oh OK they can also call the Topps 1-800 number also, which is actually an 888 number (1-888-GO-TOPPS or 1-888-468-6777). The student searches by their state, and hopefully the few shops that are located are somewhere near them. A random sampling of the lists shows that poor Utah and Oklahoma have only one participating store each. while California has a ton, I didn't take a total count but it was a pretty long list.

OK so once your kid gets the good grades they take their report card (and they probably have to bring some sort of ID to show they are who they claim they are LOL) into the shop to the manager, and they get some cards. What cards from Topps and how many is a mystery. I'm guessing that the shop owners who participate are given a supply of "freebie" cards to give out in this program. Maybe they are the same cards that are included in the retail "back to school" sets that Wal*Mart and Target sell by the boatload. 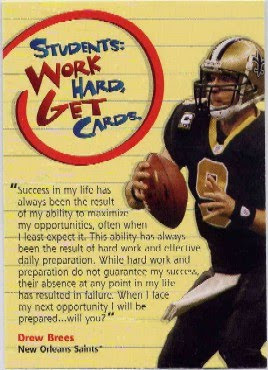 OK so it looks like at first in 2008 they (Topps) started this campaign in cooperation with the NFL, or at least the conned spokesman DREW BREES Quarterback of the currently undefeated New Orleans Saints to say something cool about how education helped him achieve his persuite of a career in the NFL. 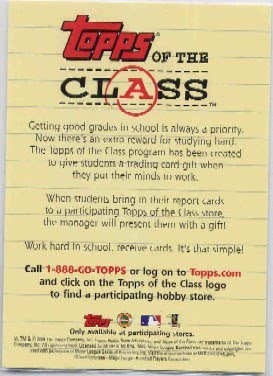 I guess the campaign in '08 was soooooooooooooooo successfull, or at least didn't lose them any money, that they decided to continue the next school year in 2009. This time Ooooh Oooooh they work with the MLB and con New York Mets 3rd Baseman DAVID WRIGHT to give his two cents worth. Actually it looks like his 2 cents worth was about half a cent more than what Mr. Brees had to say. The quote takes about the same amount of space on the card but appears to be in a slightly smaller font size. 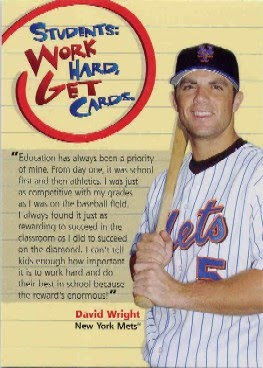 Meanwhile adult card collectors that get their cards from the various retail chains like Wal*Mart and Target are bombarded with these "Students: Work Hard, Get Cards" insert cards that most of them just toss away along with all the junk mail. These cards by the way have those white anti-theft device stickers. The same sort of stickers with computer chips embedded in them like you find in retail copies of DVDs and CDs that you buy that are attached to a plain index card. Sometimes those things are tossed behind the disc and cause the disc to become dislodged from the cases hub so that the disc rattles around and you hear something else with the disce which happens to be the white anti-theft card. If you are careful in removing those things like I am you have a nice looking, although probably totally worthless card.
Posted by CaptKirk42 at 3:58 AM