XFL League Logo Sticker #9
In 2001 the owners of the WWF Wrestling League tried their hand at a rival for the NFL. Thus the XFL (eXtreme Football League) was born. Like many other leagues that have come and gone the XFL didn't last very long, it barely lasted it's inagural season. The victory for the "Million Dollar Game" championship team didn't last very long either.

One of the big selling points for this new league, other than some more manly rules like the "No Fair Catch" rule (which meant on kickoff returns they had to return the ball not just wimp out with a "fair catch"), was more gratuitus shots of the cheerleaders. Many of the advertsing emphasized the cheerleaders and during the televised games they showed the cheerleaders often, more so than the NFL does.

One of the other big selling points for the league was the use of the "helmet-cam" which was just what it sounds like a camera mounted on a players helmet so the audience could get the players-eye view of plays. Due to the costs of camera equipment and the logistics of putting the cameras into the helmets, there weren't very many helmet-cams used. I think the helmet-cam was used more in the Arnold Schwarzenegger movie The 6th Day than it was used in real XFL games. Plus the movie had an "Expansion" team that never existed. They also had a sky-cam, had half-time locker-room-cam. Come to think about it they were trying to make it more of a "reality" game than a regular professional sports game.

Also the players had the option of putting anything they wanted on the back of their jerseys so some of them had nicknames on their jerseys, the most famous was Rod "He Hate Me" Smart, Chad "Ochocinco" Johnson would have fit in perfectly.

The league was pretty much a hit with the fans that got into it, but not so much with over-all ticket and merchandise sales so the league folded. Another big reason the league folded in my opinion is they spent way too much time on "during the game" interviews with players, coaches and anyone else they could get on camera.

OK enough background and on with the show. To help promote the league Topps made some trading cards of course (a 100 card set, I have one coming from an Ebay auction so I'll get around to talking about that set after it comes in soon) and a set of 10 stickers. The stickers have the 8 team logos, the league logo and a league ball (they had to have something for the final sticker and they already used the cheerleaders in part of the card set). 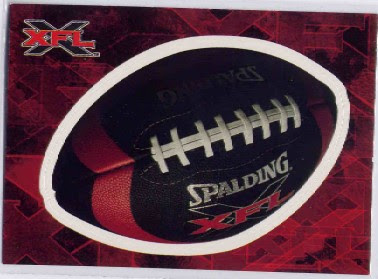 Each football league, even the college leagues, have to have their own style of football I guess. Well the XFL used balls made by Spalding with their own unique design. The front of the stickers have the XFL logo in the upper left corner, the team logo centered as a die-cut sticker and the team's name in the lower right corner. The backs of the stickers show the league logo on the background color that was used for the team logo on the front, a smaller team logo under the league logo, and the sticker number (x of 10) in the lower right corner after all the copyright info. 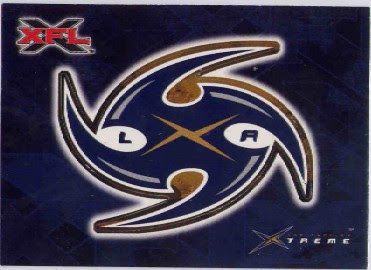 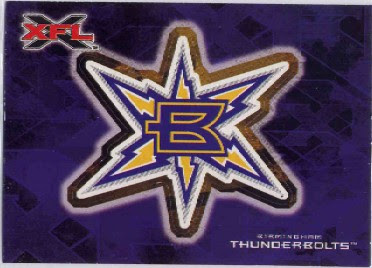 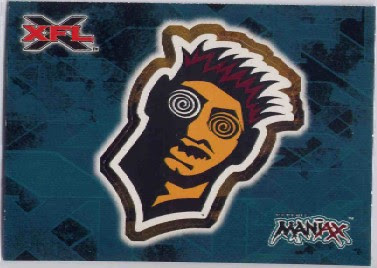 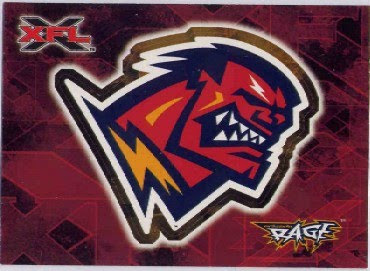 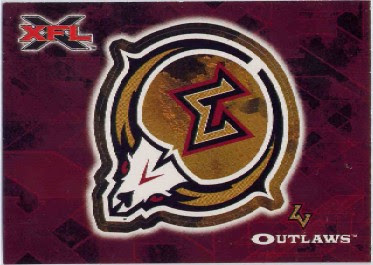 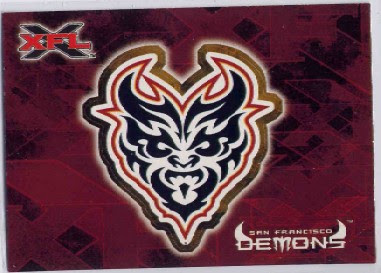 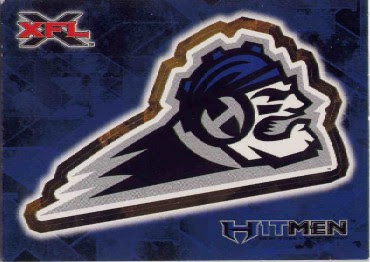