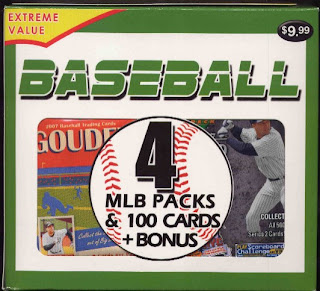 2007 Goudey: I really like these retro vintage cards. Mostly since I'm a huge fan of vintage stuff. I have always liked the Goudey cards, but I don't think I have any original Goudey vintage, partly because when I was a kid they were too expensive at the time. As an adult they are not too expensive for me, well some of the common ones maybe. When these retro cards first hit the market I saw them but didn't get any because the hobby boxes were too expensive and at the time (and I think even the packs seemed a bit expensive at the time) I didn't want to get into the pack busting of these since I knew I'd have to get a bunch everytime I wanted to bust packs. These cards follow the original design and format idea the cards are smaller than the standard modern size of 2.5" by 3.5".

The card backs have either red or green printing. I think they printed an equal amount of each back, not 100% sure on that though sometimes card manufacturers like to make a short print of one of the styles just to tick off collectors who want to go for a complete set.