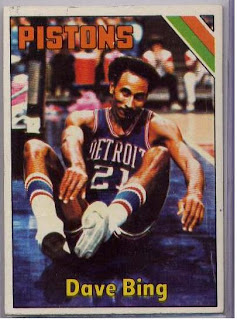 Here is a basketball card I've had since my childhood. As I said in my post about my Phil Chenier RC yesterday (well actually just a few minutes ago I'm scheduling these posts at a later time) I don't follow basketball anymore, but when I did the man on this card was one of my fave players. In 1975 he played for my fave homie team the Washington Bullets. I saw him play a few games during his career with the Bullets from 1975-'77. Not many but a few in fact at one game a friend and I attended we got to the "Cap Center" a little early and got to watch the warm-ups/shooting practice (or whatever basketball calls "batting practice") and got a close up look at some of the players including Dave. The Capital Centre was located in Landover, MD later renamed US Air Arena but I will always know it as the Cap Center. Sadly it no longer exists.

OH by the way Mr. Bing is now the Mayor of Detroit. When he was elected or started his campaign I blogged about it at my regular blog in the post titled "The Politics of Sports".

*A Homie team is the team located in your home city/town or area that you root for so calling them my "fave homie" team is a bit redundant. It gets the point across anyway.
Posted by CaptKirk42 at 8:30 AM