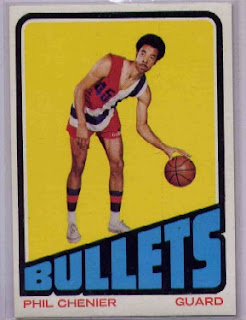 1972-73 Topps Basketball
Phil Chenier RC - Baltimore Bullets
This is Phil Chenier's Rookie Card, he was drafted by Baltimore in 1971. Phil would be one of the Bullets' top shooting guards but after a back injury in the 1977-78 season his game would be very off. I never kept track of basketball statistics as a kid I would just occasionally watch and a few times attend Bullets' games, until sometime in the late 1970s maybe early '80s when I grew tired of basketball.

The 1972-'73 NBA season would be the last season for the Baltimore Bullets (1963-1973) previously the Chicago Zephyrs (1962-1963). In 1973 they would move to Landover, MD and become the Capital Bullets for a season and then the Washington Bullets. In 1997 the team bowed down to pressure from the Politically Correct crowd and changed their name to the non-violent Wizards (and actually move into the City of DC eventually).
Posted by CaptKirk42 at 7:30 AM