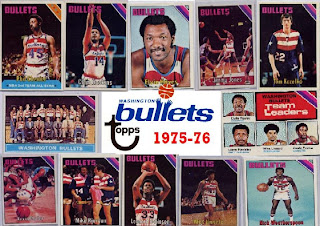 I'm not much into basketball anymore actually I tend to avoid it whenever possible. The reasons are many. So  why am I blogging about it? Well that is because I wanted to show off the Team set I had that I started back when the cards came out and didn't finish until getting the cards from Sportlots.com  I don't recall exactly when I got the last card in. I'm not even sure who it was. I haven't been into basketball since sometime during the late 1970s or early '80s in the days before Michael Jordan made basketball stars mega stars. Back in the days when the uniform shorts weren't gangsta' baggy drawers. Back before the PC attitude that forced a certain Washington DC team to change it's name from what was perceived only as a piece of a lethal weapon (and not the object of super speed the name made fans think of) to a generic title for a fantasy man of magic.

For collecting purposes I am ONLY into The Bullets (and sort of the Wizards) with maybe a few stars/hall of famers from the time I was into basketball the 1970s. I'm not sure if I'm going to pursue any more Bullets/Wizards cards, maybe I will. I do like some of the now vintage 1960s and '70s era cards.

The 1972-'73 NBA season would be the last season for the Baltimore Bullets (1963-1973 previously the Chicago Zephyrs) In 1973 they moved to Landover, MD and became first the Capital Bullets for a season, and then the Washington Bullets. Then in the mid to late 1990s the Politically Correct crowd would force the team to change their name something non-violent The Wizards. So black magic and sorcery is OK but an object of speed and accuracy is not. Oh OK bullets are the part of a gun that is the instrument of injury and death, but I still think Bullets is a cool name for a sports team in a sport that requires skill and a bit of speed every now and then.

Anyway I have all the individual player cards of the Bullets, the Team Card, and Team Leaders cards from Topps 1975-76 series. If any of the players appeared on League Leaders cards I don't have those and might be interested in them to have the Master 75-76 Bullets set. As it is right now I just have the Base Set which is pretty complete enough for me.
Posted by CaptKirk42 at 12:10 PM