My last post was a little cryptic. I have done my box break and started to sort the cards, posted a little late and well now the cat is out of the bag.

OK where to begin?
The Beginning why not?
“A long time ago in a galaxy far, far away…” OK Wrong beginning.

Some weeks ago I got a surprise email from one of Upper Deck’s Marketing people. It began with a short introduction and then the attention grabbing “I wanted to reach out to you because I love what you do regarding your Upper Deck card set.” I’m not sure exactly which set is being referenced or what special thing I did to get on the marketing department’s RADAR. I just hope I stay there so I can get more goodies. (Topps, Rittenhouse and Panini would be Super as well)

Anyway continuing…
“We would love to connect with you regarding some other sets including 2015 Upper Deck Canadian Football League, 2015 UD Turkish Airlines Euroleague Basketball, and 2015 UD USA Football...I have a couple extra media review copies and wanted to see if you would be interested in receiving one each as long as you would write something up on the product to share with your audience.”

I replied positively to the email and included my mailing address. A few weeks later, on Wednesday 23 December 2015 the Eve before Christmas Eve I got my package from Upper Deck. In a sea of pale pink packing peanuts was this fine hobby box of 2015 Upper Deck Canadian Football League cards 24 packs with 6 cards per pack. Those other products would be fun to bust as well, but Oh well. 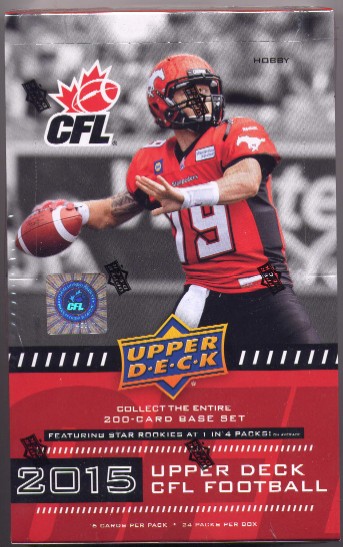 Since there are 24 packs I will have to post the pack-by-pack listing separately to keep this from being too long a post. 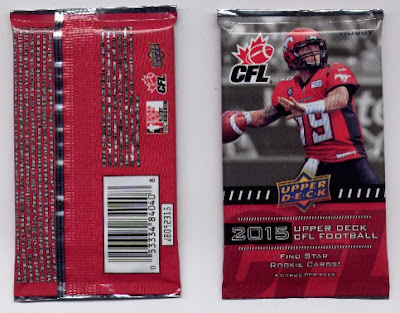 First off I really enjoy this product mostly for its simplicity. My box breaking experience has some positives and negatives that I will cover with this post.

The base set consists of 200 cards. Inserts include retro O-Pee-Chee cards (50 card set), autograph cards, game used jersey cards, #d GU patch cards, and team logo patch cards. Cardboard Connection has the full checklist and basic product details at this link http://www.cardboardconnection.com/2015-upper-deck-football-cards (you will have to click between product details and the checklist)

I like the plain simple design with the bottom corner framing and the opposite corner flush with the edge. I am glad there is no annoying silver or gold foil that is impossible to read. Sadly there is some white lettering on silver background where the player’s position is listed.

The front of the base cards has a large picture of the player mostly in-game action shots. The Upper Deck logo is in the upper left corner and the top and left sides of the card the picture hits flush on the edge for the “full picture” feel. The Right hand border is a white background with some light gray/silver shadowing and some team color hashlines top and bottom with the player’s position in white lettering (hard to read and gets lost) in both English and French. The bottom edge has a border that matches the teams main color with the Player’s name in white letters (the name could be a bit bigger) under the player name is his team name in gray/silver, very tiny a bit harder to read than the player’s name. And in the right hand corner of the colored border is the team logo.

The back is pretty standard they repeat the head/bust part from the front picture. There is some matching of team colors with the general design. 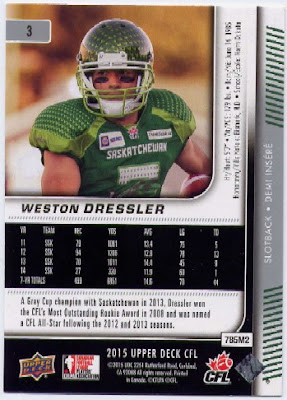 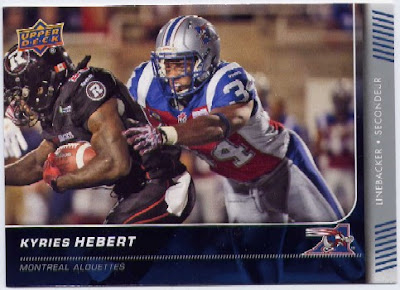 The inserts sadly don’t list the team names, but do have the team logos on the fronts. There are two main insert sub-sets “All-Stars” and “Star Rookies”. Oops those are also base cards. Well they have a slightly different look so I mistook them for inserts they are actually two “sub-sets” within the main base set numbering.

The All-Star Cards divided in their coloring by East (red border) and West (blue border) Divisions. The color border runs along the top, left and bottom edges with the right side having the player’s picture flush against the card edge. Again the Upper Deck logo is in upper left corner. Top right of the card kind of hard to read is the Division (East or West). Left side again in tiny lettering is the player’s position. On the bottom is a gray/silver banner with All-Stars in black lettering with the player’s name in white lettering underneath, and team logo on left hand side. Oh and I just noticed the player’s number in the bottom right corner how nice, didn’t see it before. 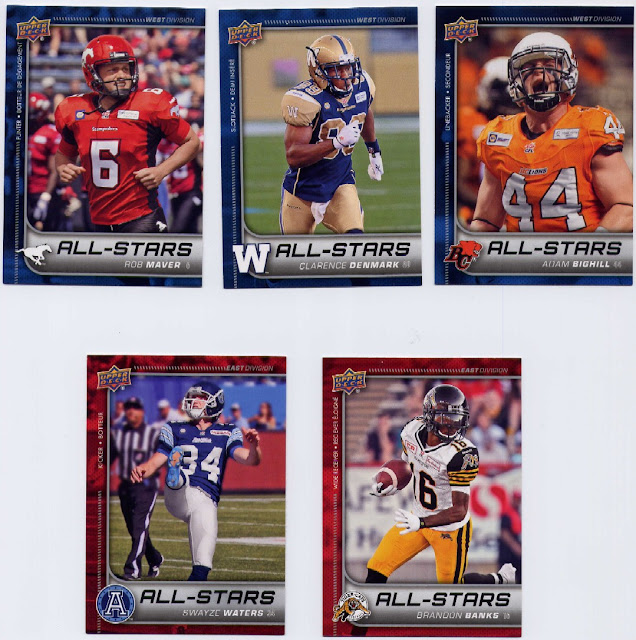 Backs are nicely done, except nowhere is the team name actually written out, just the team logo on front. After opening a few packs I got used to the various teams. I don’t follow CFL as closely as I do the NFL so I am not as familiar with the 9 teams in the league. I really wish they would do some expanding and have 12 teams to make things a little more exciting. 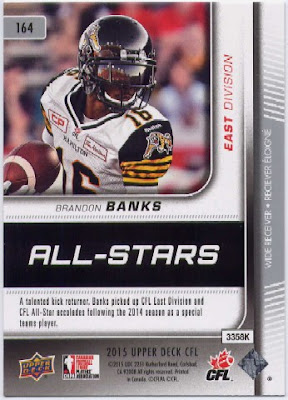 The Star Rookies cards again follow the regular base card team colors design. The front player picture is flush with the top, bottom and right edges the left edge has a color bar that matches the player’s team colors. The usual Upper Deck logo in left corner Star Rookies reading bottom to top vertically along the bar and team logo bottom corner. Player’s position reads “under” the Star Rookies “banner” along with a series of stars. The player’s name is in silver across the bottom. Team name not listed just team logo in corner. 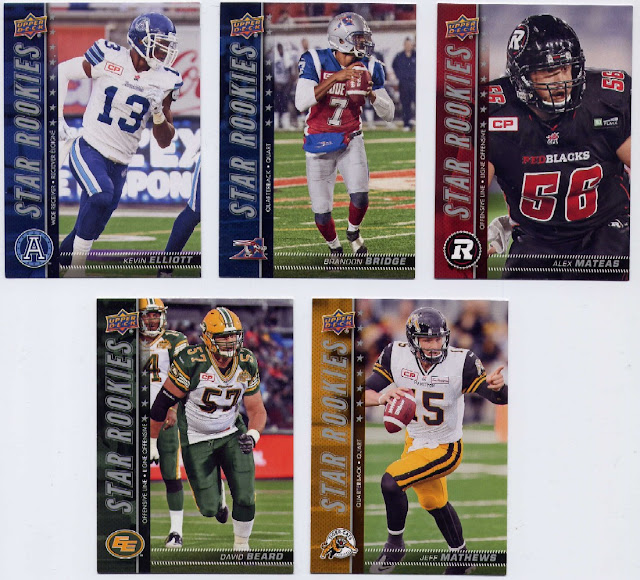 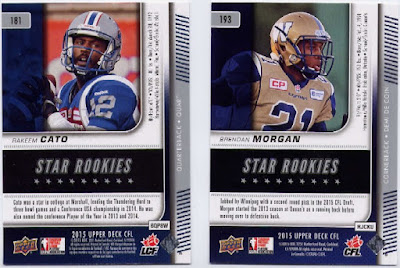 The Retro O-Pee-Chee cards remind me of a cross between the 2009 retro cards and 1960s cards. They have an all white border, the upper left corner has a retro looking OPC logo, The player’s photo outlined in white against a solid color background. The player’s name is in white letters on a black bar above a white bar with the player’s position in black. The team logo is in the bottom right corner. The team name is not mentioned. 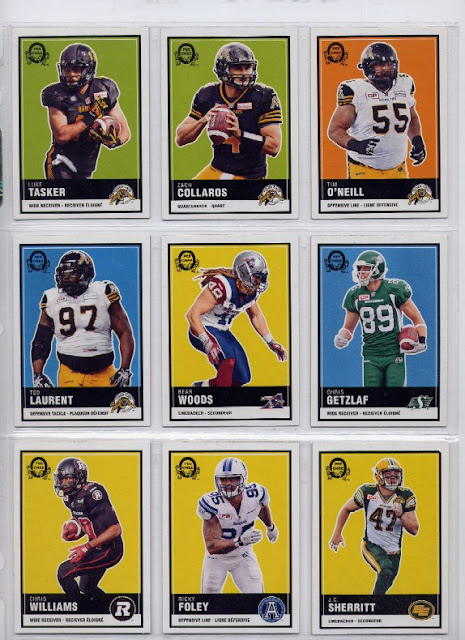 The back is raw cardboard brown with black lettering. I really like this insert set and plan on building it. 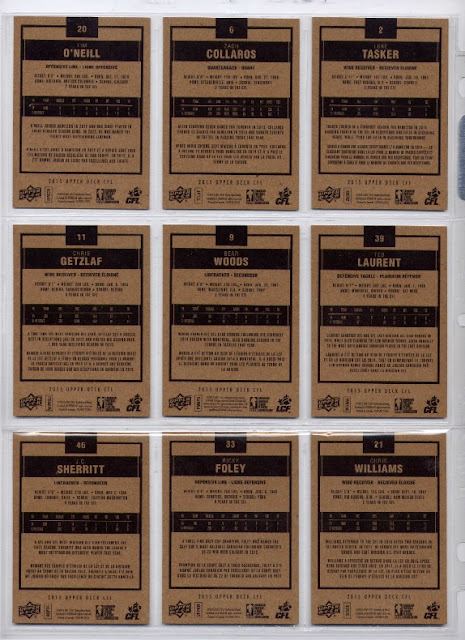 Here are my basic totals from the box:

Totals:
23 White Blank Decoys: So one in each pack without a hit.
145 cards (1 extra)
Base: 134: A full set is 200 cards so you need at least 2 boxes to maybe get a full set. Due to the randomness there is no guarantee of that even.
Protrait/Vertical: 120
Landscape/Horizontal: 14
5 All Stars: Average 6 per box
7 Star Rookies: Average 6 per box
10 Duplicates 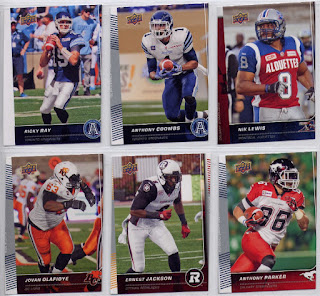 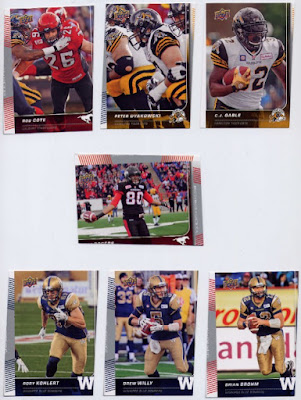 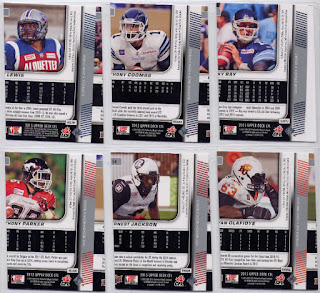 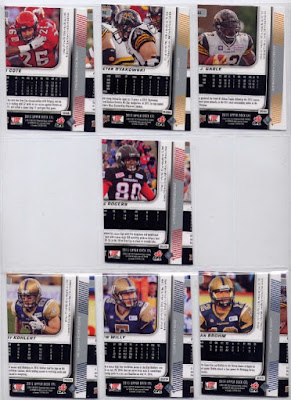 All-in-all I liked breaking this box. It is a fun product. Being a football fan that is more NFL than CFL it did teach me a few things, or reminded me of a few things. Like a fave homie player that I had forgotten plays in Canada now. Let’s see the positive:
Now the negative:
I will keep a handful of the base cards, the Brandon Banks cards because he was a Redskin, and one of the best punt returners they ever had. They never should have gotten rid of him. I am also keeping the OPC Retro cards I plan on building that 50 card set. I will be trading or giving away most of the remaining cards.

My next post will have the pack-by-pack play-by-play and will show some of the cards I didn’t show here.
Posted by CaptKirk42 at 3:00 PM