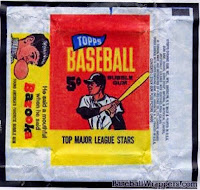 I'm not a huge New Years resolutions maker. I don't like being one of those phonies that makes some fancy resolution only to fail 3 weeks later. Last year (2015) I had a sort of resolution/goal that went uncompleted my Strive for '65 Topps Baseball set build. Bummed that is not complete. It would have been great to have it done for when I wanted ON the 50th Anniversary. Now it is the 51st Anniversary will I get it completed? Who knows?

For this year (2016) I will continue to pursue that set build, plus from the 2015 Topps Archives Baseball I want at least the 10 Will Ferrell inserts. The base set not the super overpriced autograph versions but the regular base cards. An auto card would be great but I don't see those going for cheap. It seems the only people buying them are those that want to keep it, and those who want to sell it at a high-price. So what else is new? I don't want to spend more than about $5 per card and most of them I have been seeing for $8-10 minimum. So I need all ten of those: (WF-#) 1, 2, 3, 4, 5, 6, 7, 8, 9, 10 on my standard real cheap. On Ebay I bid on the A's card (WF-1) $2.99 + $3 shipping since I had planned on bidding on a partial set of the other 9.

Oh and I guess I should try to complete my 2003 Bazooka Joe subset.

I also have two ancient trade commitments maybe more, and three or four lingering promises of sending out contest winnings. So I need to try concentrating on those as well. I'd like to be able to occasionally send out some surprise packages and PWEs.

I really need to get my card hoard organized and put mostly in binders. That or any organizing will take sometime.