This is my second attempt at this post the first one the automatic html was acting weird and I deleted a formatting line resulting in text getting printed over anything that followed it in the post so that the image that followed the text had text overtop of the image. UGH. I hate that you can't go back and reinsert something you just deleted while working within the post creating section. Anyway enough of my technology impairments. You just wanna see necked women, well not quite necked this is a PG Rated Blog.

On Monday 02 April 2012 I got several packages from various sources one was an Ebay auction for a small set of 9 cards. I got the set for $12.69 + 86¢ I went into a little detail about the auction with a brief description of the set (actually it was briefer than the bikinis that are shown) in my Maildays 01-07 April post. Now onto the set: 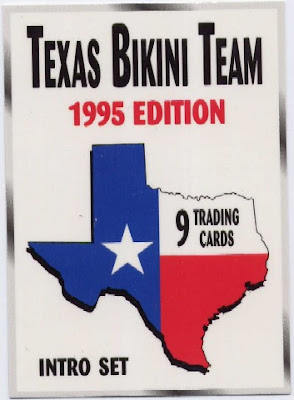 This little Nine card set was released in 1995 by Image 2000 is titled as an "Intro Set", I'm not sure but I think this is the only set that was made of this potential series. As you can see the set contains 1 title card and 8 cards with bikini models on them. 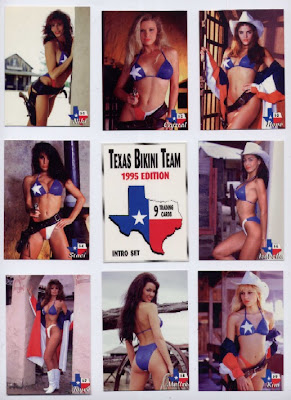 The card set is designed to be placed in a 9 pocket binder sleeve page in numerical order, because as you see all the backs have puzzle pieces that make up a nine card image (The model shown is Hope from card number 3). 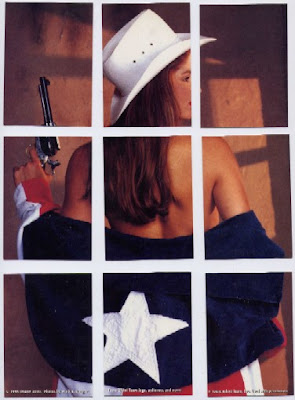 The backs of the cards don't quite align up if you place them flush against each other, they are cut to allow a tiny border space for placing and displaying in a binder as I said above. If they were framed and mounted with perfect alignment the image would look like you are viewing Ms. Hope through a window. My scan of the backs isn't perfect but its close maybe I should have tried scanning it in a binder page.

Now onto the individual cards. The cards are numbered with an "I-" preceding the card number (except for card number 5 the title card and middle puzzle piece card) the "I" being for "Intro" or maybe "Inaugural" but more likely "Intro". The numbers are in the white corner of a red, white and blue Texas shaped logo with the model's name in white at the bottom of the logo. All these Midwest Ladies are modeling the same red, white and blue bikini honoring the Texas State Flag. There are 8 models and 5 are wearing a single gun holster accessory, 2 of them are holding the gun, 1 is holding a coil of rope, 3 are wearing white cowboy hats, 3 have a cape/jacket/blanket wrapped draped on them and 1 is shown wearing white cowboy boots I'm guessing all of them are actually wearing the boots but you can't see most of them below their knees. 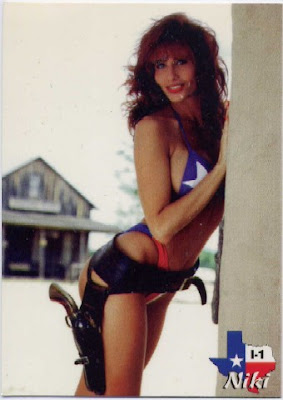 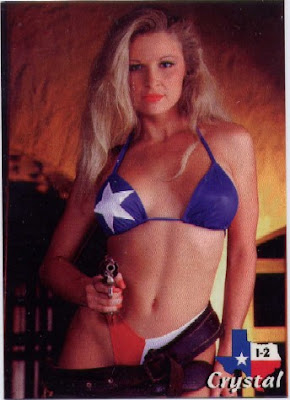 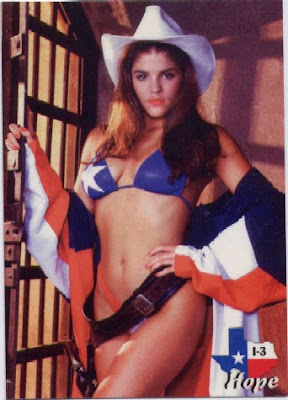 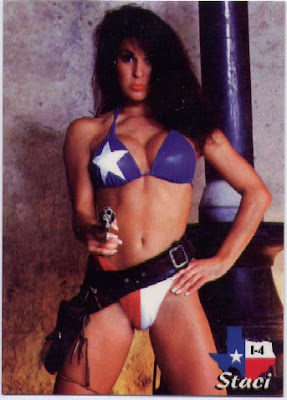 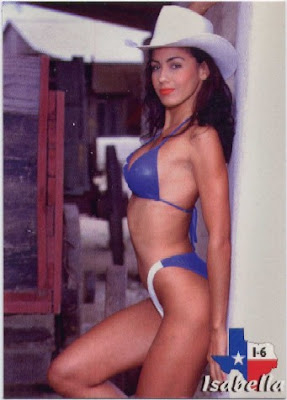 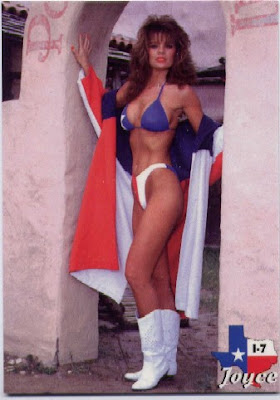 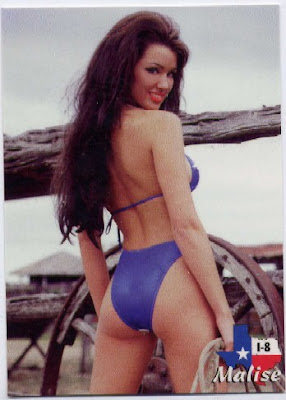 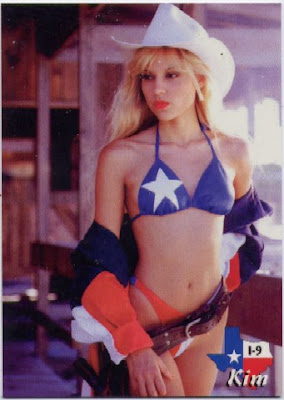