This Is What Happens When You Get Traded

Wow talk about getting traded all over the place. Here is a case of a player being traded late in the season to a team that moves to another city the next season but he gets traded to a third team before playing in the new city then before he can play for team number three he gets traded again. I'm talking about this player and his card. 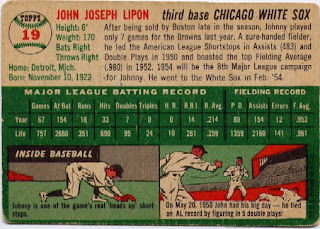 It wasn't until I looked at this card closely while I was scanning it when I noticed all the crazy team changing. Looking at this card one can get all sort of confused. ON the front Johnny in the main color portrait is shown in a Red Sox hat and in the small black and white action photo he is wearing an Orioles cap. The card states he is with the Orioles and shows the Orioles Team Logo. Now on the back it says he is with the White Sox. It also mentions that he was traded late "last season" (1953) and played only 7 games with the "Browns". It then goes on to say he was traded to the White Sox in February of 1954. So how does ONE player go to FOUR different teams within one year? Wait I just did some researching and it is even stranger. He never played for the White Sox before playing a single game for them he was traded to the Cincinnati Redlegs (Reds).

So to try to get things straight: John Lipon was playing with the Red Sox when he was traded to the St. Louis Browns in 1963 late in the season. The Browns would move to Baltimore and become the Orioles in 1954, however, Johnny was traded in February of 1954 to The White Sox before playing in Baltimore. The White Sox then traded him to the Cincinnati Redlegs before he even played a game for them. The card doesn't say so, but my research shows he only played one game for Cincinnati then got sent down to the minors where he played a few more years and then started coaching. So as Nick at Dime Boxes would say this is a "Zero-Year" Card. Well sort of he never played for the Orioles but did play for the franchise that moved and became the Orioles, and he never played for the team he is listed with White Sox on the back.
Posted by CaptKirk42 at 4:00 PM