Watts in a Name? Football Glass

Every once in a while I run across a name that strikes me as being funny, ironic or sometimes unfortunate. From time to time I will try to show some of the cards I have with these names that stand out.

This first card I'll mention I got first because of the name and second because I need to complete this particular set that I am leagues away from completing. I got this card from Ebay for 99¢ + $3.00 shipping 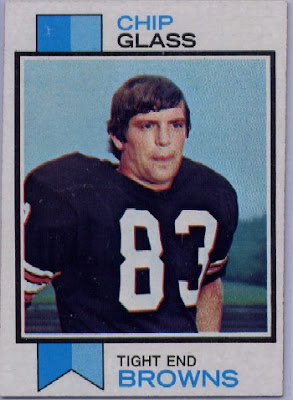 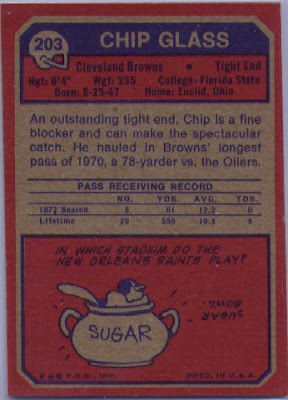 This is Chip's Rookie Card, and apparently his only card. Guess Topps doesn't like to pick up broken glass off the floor? Chip made his NFL Debut in 1969 playing for the Cleveland Browns he was traded to the New York Giants in 1974 his last season. According to the back of his card he makes spectacular catches and in 1970 caught a 78 yarder vs. The Houston Oilers.  At the time it was the Browns longest pass. The cartoon is interesting in that it is totally unrelated to the player featured or his team. That is typical for Topps it seems. It has a trivia question about which stadium the New Orleans Saints play in A: The Sugar Bowl. The Superdome was under construction as it opened 2 years later in 1975.

Mr. Glass reminds me of commedian/actor Bruce Mahler who is best known for being in the Police Academy Movies as Sgt. Doug Fackler.

I remember Bruce from the sketch comedy show Fridays, which was ABCs attempt at a Saturday Night Live. It only lasted 3 seasons from 1980-1982, I thought it barely lasted one.

Edit: Yes I borrowed this idea from another blog. That one when they do make funny name posts I think they concentrate on the more unfortunate ones
Posted by CaptKirk42 at 2:00 PM