To take a little break from my group break I am making this Blog Milestone Announcement. This post is Post #300:

I don't normally even bother with post counts, but I do check it out from time to time along with some of the other stats of the site. Usually though it is disappointing. To reach #300 It only took 5 years, 7 months and 11 days to be exact. Well technically one of the posts in my draft queue is number three-hundred, but I won't get that technical especially since I'm not sure which one would be the exact number three oh-oh.

In thinking of what I was going to post for this announcement I first searched for some kind of generic 300 image to use but 99% of the pictures to pop up in a search for 300 are for that movie about the Spartans made a few years back about the Ancient Greek Battle of Thermopylae. If you don't know the movie I'm talking about lookie here.

Then I had to be a bit more specific in my searching and thought about modern baseball players and cards since this is a card blog. I thought maybe I'd show card number 300 from this years Topps Baseball but I didn't want to show the Mike Trout card. Then I thought about players who are in the 300 Home Run club. I didn't know who to feature then I looked at the Top 300 Home Run Hitters and sitting at number 137 with exactly 300 Home Runs is HOFer Chuck Klein. He is the only guy on the list right now with exactly 300. 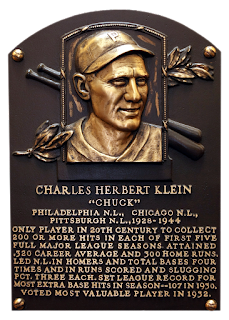 Mr. Klein known mostly for being with the Phillies also played on the Cubs and Pirates. Looking to try to find a picture or a card of Chuck whetted my appetite for some vintage cards.