Back in March (Tuesday 27 March 2012) I got a bunch of cards mostly baseball some of which I will eventually talk about here, but I thought I'd get these two Non-Sport cards out of the way. I got them from Sportlots for 25¢ plus whatever the shipping was. It was two separate one card auctions from the same seller. The subject of War isn't too fun, but the images of these two cards are pretty cool.

I don't know much about the sets these are from, but this first one is from 1939 so the war had just begun, but not for the US yet where the set was printed. They seem to be pretty rare and auctions at real auction houses usually have full sets going for outrageous prices. 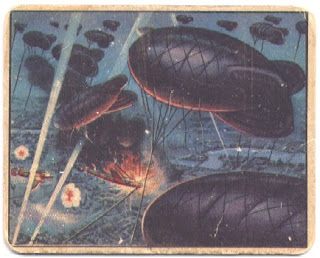 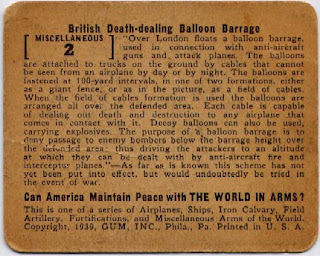 This next card is from 1952 well after the war years. It is from the very popular Wings set by Topps. They have the feel of military issued training flash cards, but I don't think they had ever been used as such. The plane featured is the F4U Corsair a plane that I first saw and heard about in the mid 1970s largely in part from the television show Baa Baa Black Sheep later renamed Black Sheep Squadron for syndication starring Robert Conrad as Maj. Greg "Pappy" Boyington who was a real World War II veteran/hero. The show featured other actors who went on to later fame such as John Larroquette (Night Court). The real Pappy Boyington did a walk-on role as a General for the show. The show got a lot of flack because of the way it depicted Boyington's men as misfits and that it was historically inaccurate. 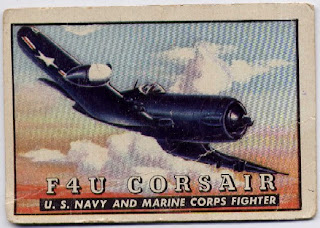 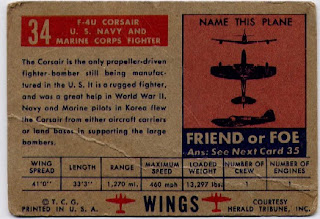