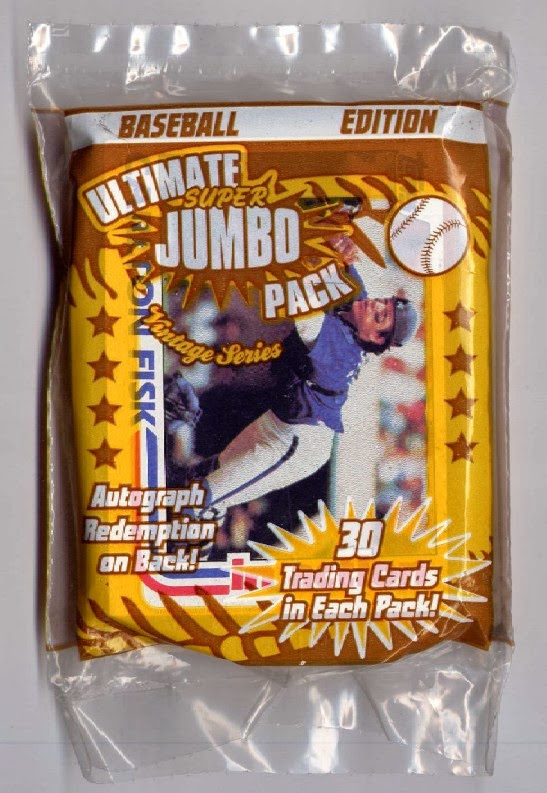 Some people like repacks and some people love them. It seems that in general most card collectors do not, but a lot of card bloggers seem to. I am one of the converted. At first I shunned them because they almost always contain a ton of "junk wax" but since I was sort of in collecting hiatus during the height and tail end of the junk years I am one of those rare birds that doesn't have a ton of it. So before you Toss out that junk send it my way, or recycle it heck the things are cardboard and cardboard gets recycled.

Most of the repacks I have opened have been Fairfield ones in various forms that I purchased from Target. I have heard other bloggers sing the praises of the repacks at dollar stores and in particular at Dollar Tree. Fortunately I live within walking distance of a Dollar Tree and also a Family Dollar in the same strip mall shopping center, except the Family Dollar doesn't carry cards. :( On one trip to the Dollar store to save money on kitchen, bathroom or some kind of house supplies I went to the Dollar Tree and got two packs of cards. These are the cardsone (Cards One) type repacks. I got the 30 card "Ultimate Jumbo" pack Baseball Edition. I was tempted to get some of the semi-current "Hoops" basketball packs they had but since the Bullets now Wizards are the only Hoops team I collect and those packs only have 5 cards in them I would end up trading or selling more cards or more realistically getting stuck with Basketball cards of players I don't know from teams I don't want. I just might get some sometime just for the fun of it.

As I said I purchased two 30 card packs. I will mention the goodies from both packs in two posts to keep the individual posts short and to keep people from getting board from one exceptionally long post. 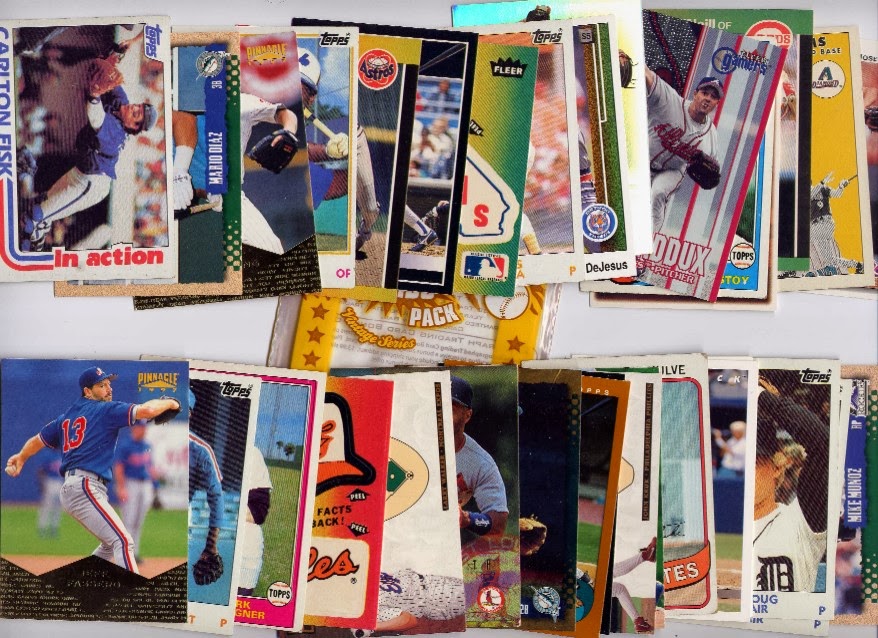 The contents of Pack One in a group shot
So Pack One I opened on 03 Feb 2014
Pack One: 1982 Topps Carlton Fisk IA showing on front (back can barely make out back of card Mike Munoz)
Some of the cards have small dings and paper ware on edges. The orientation of the cards was a mishmash, some where flipped over and some were upside down. Making things more random and in some ways more exciting. 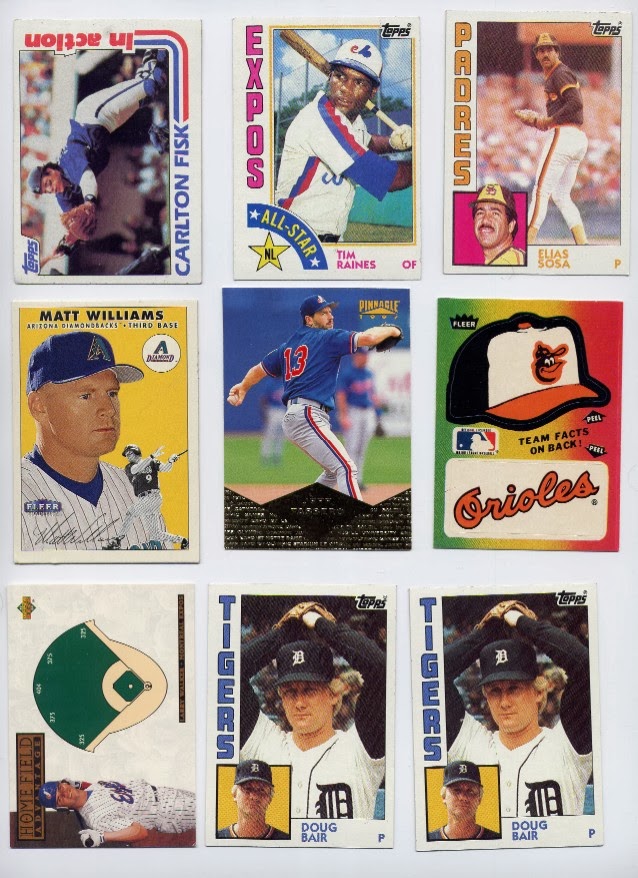 Select cards from repack
(front and back) 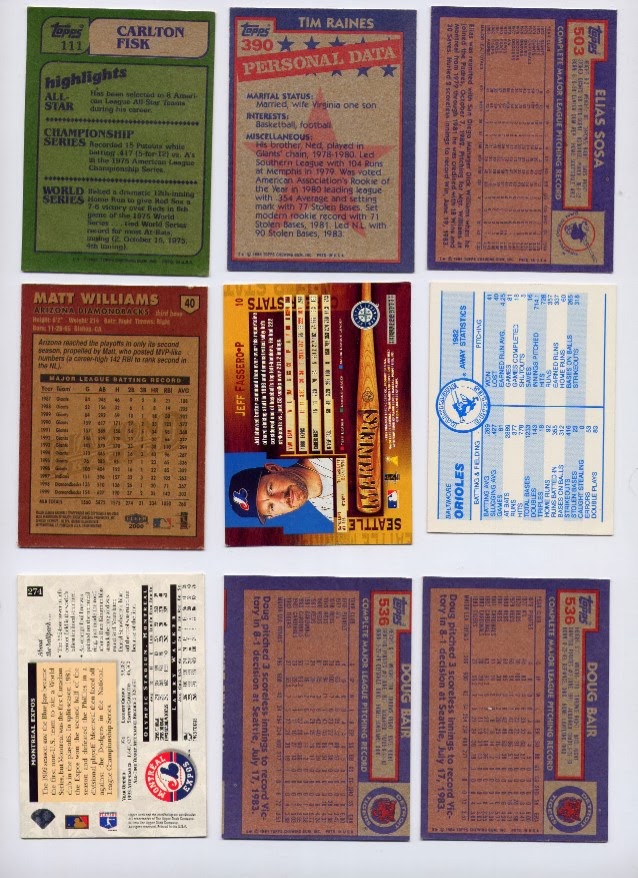 There were a total of 33 cards in Pack One (Hey 3 more cards than advertised) Here is the list of cards in pack order.
1982 Topps  111 Carlton Fisk IA White Sox 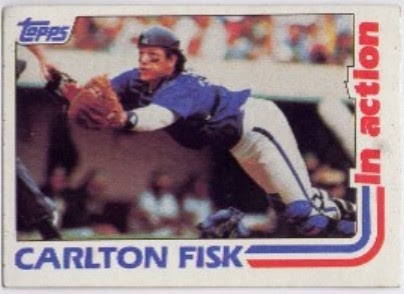 Those "In Action" cards (which usually follow a card with a regular "non-action" or portrait picture of the same player) a throwback to the 1972 set. 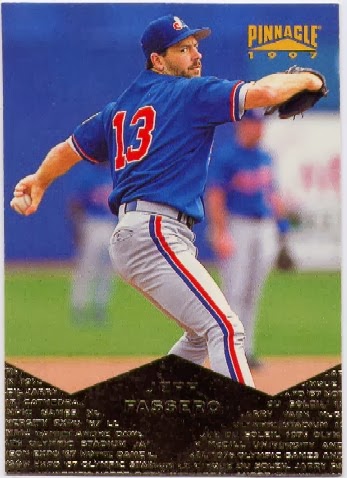 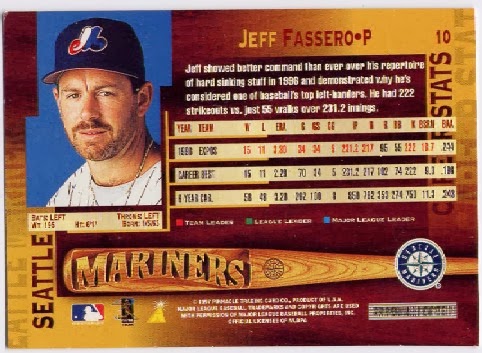 When I first got a 1997 Pinnacle card I hated it because it was difficult to read the players name in among the gold leaf design on the bottom of the card. I'm still not thrilled with the design but I think I will at least try building a few team sets if not the whole set. After I scanned this card I noticed the weird photo edge cropping on the back portrait I checked the back of the other 1997 Pinnacle card from this pack and it has the same weird cropping. 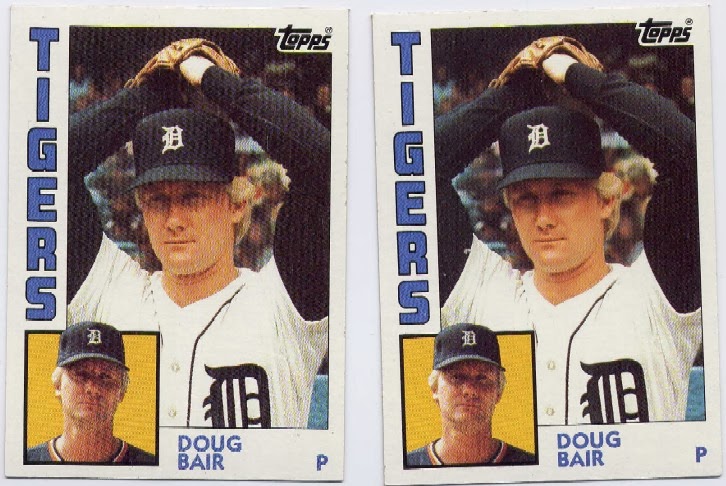 Pair of 1984 Topps Baseball 536 Doug Bair Tigers
miscut card on left better centered one on right
Backs: Better one on top miscut one on bottom 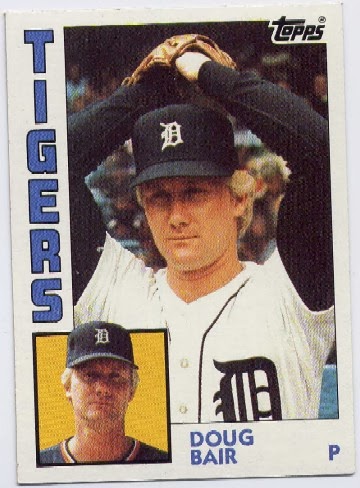 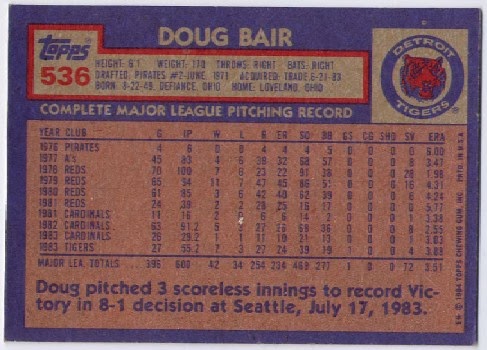