One of my favorite TV shows will come to an end later this spring shortly after returning to the Sci-Fi channel (spelled with two "y"s and no "c") for a 5th and final season of only Six episodes. Warehouse 13 a well written adventure series often with witty tongue in cheek humor reminds many of the late 1980s show Friday The 13th: The Series (in recent years renamed "Friday's Curse" to avoid confusion with the horror movies of the same name). One of the characters on Warehouse 13 Myka Bering played by Canadian actress Joanne Kelly fast became one of my faves on the show. So...

Back in November of last year (Thursday 21 November, 2013 to be exact) I had a two card mailday. As many might know by now I keep track of my maildays on my TCC blog. I got this card by sniping on Ebay, in this case I really really wanted the card. I started watching it, and was nervous about it because it was getting some bids and creeping toward my comfortable maximum bid (as is the case with many sketch cards that often "start" at too high a price for me to even consider bidding). About a day or two before the end of the auction it had 6 bids and was at $15.50 many more bids and it would be out of my comfort zone. The Final night I watched it periodically for updates and in the last few minutes kept checking it and refreshing my browser then when it was down into the final minute I bid my max of $35 and for about 40 seconds I was worried another sniper would come by, the ones that use the sniping software and don't have to watch the auction at all because their program bids at the last second or two. Fortunately for me I had the winning bid. The 7th bid at $21.50. I thought the shipping had been set to $3.50 but it showed up as Free Shipping in "My Ebay". I was really glad I won the auction for this beautiful sketch of a beautiful woman.

The Artist Javier Gonzalez of Blackhilt Studios I think was also the seller under the Ebay handle Blackhilt Studios. The card was listed as an ACEO (Art Cards Editions and Originals) sketch card. 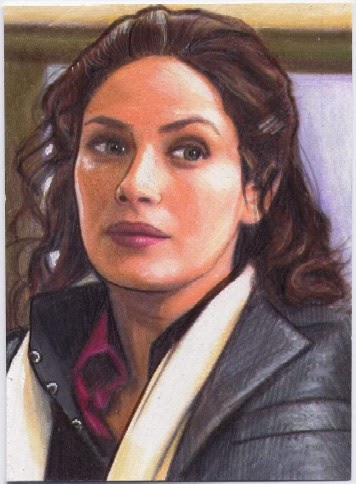 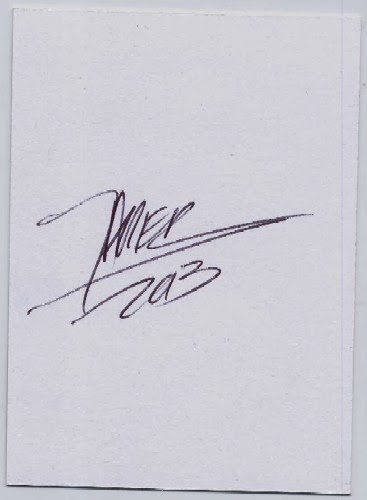