Card of the Whenever: Willard Sherman Rams 1956 Topps Football

CARD OF THE WHENEVER:
1956 Topps Football Willard Sherman

Here is another installment of my "Card of the Whenever" posts. Since doing a "Card of the Day" or a "Card of the Week" or any other regular schedule doesn't work for me I came up with the "CotW". I haven't been keeping track of these but this is the second one so far and the second vintage card from the 50s. The last one was baseball and the first of the series this one is football.

Wow look at that miscutting. The back is missing the bottom copyright info which you can start to make out the copyright info from the next card at the top. Back then the copyright lines didn't have a year just the TCG (if they were made by Topps), so with this card if you didn't recognize the design as being from 1956 you wouldn't know exactly which year it came from. From the info on the back with "Topps Football" around the card number you could tell it was made by Topps, and by mentioning 1955 you would know that it had to be at the earliest late 1955 seasoned collectors would just assume 1956 since '55 was the last year mentioned (and if they researched the "year" stats it would turn out to be for 1955). Wow his career high of 11 interceptions was the '55 season.

I don't recall when or where I got this card, probably from an auction at sportlots. 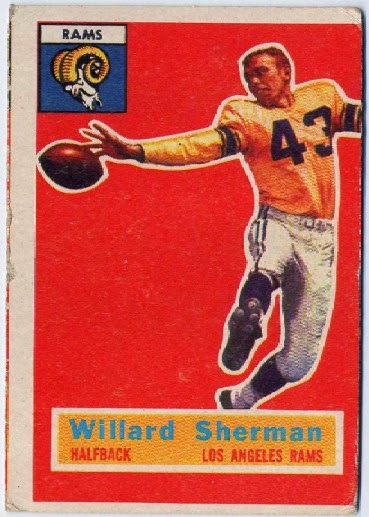 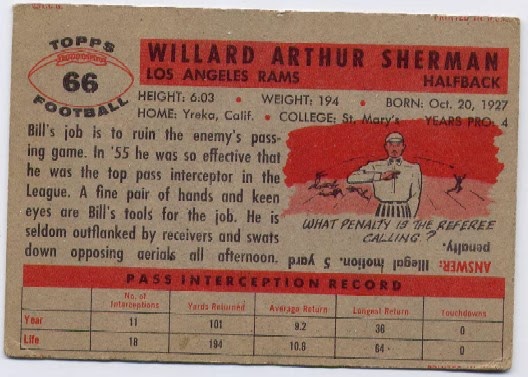 EDIT: Wow had to do some editing (adding) to make some of this make a little bit of sense. Even then some of it still doesn't make sense. So much for making blog writing a paying gig. That is what I get for drafting posts after midnight.
Posted by CaptKirk42 at 12:00 PM