From the Ebay Bullets package I got on 11 Feb 2012. Here is a group of three cards from: 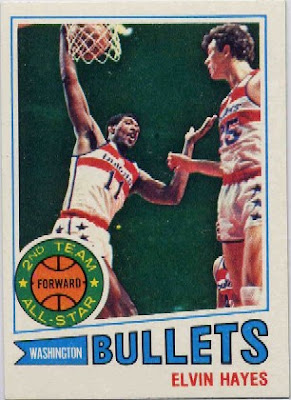 OK so this card looks a little weird because Mr. Hayes appears to be slam dunking but his team-mate Mitch Kupchak appears to be walking on air? 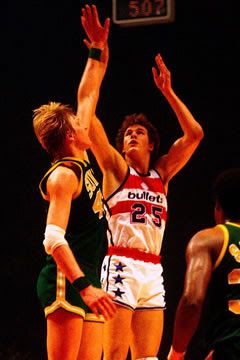 Bullets #25 Mitch Kupchak
Photo from Bullets/Wizards Alumni webpage
They must have lowered the basket or used a small kiddies basket that is only about 6 feet off the ground (Edit That can't be right either the players are 6 feet plus) instead of the standard 10 foot regulation height baskets in the arenas. I didn't notice that until I started commenting on this card in this post. 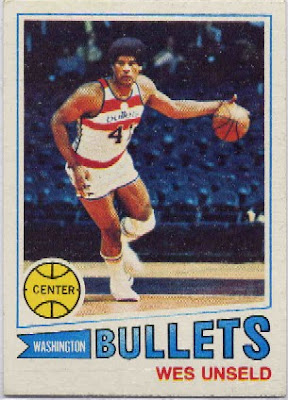 The way Wes is leaning here it looks like he might end up on the floorboards. Anyway if I recall some of my childhood basketball memories correctly, despite starting to hate basketball sometime during the early 1980s, Mr Unseld was my favorite or one of my favorite Bullets players. I'm not sure where I have it but somewhere I have a mini poster circa 1976 from McDonalds of Wes and Coach 'K.C.' Jones from a series of mini posters they sold. The posters were one of the premiums that if you bought a certain sandwich (probably a Big Mac or Quarter Pounder) or "meal" you got the poster free, or you could buy the poster for $1.00 I think was the price. Each poster had 2 players pictured on them, there were 4 posters in the set. The "pictures" were caricatures of the players. I noticed someone on Ebay is selling the full set for $275.00 with $6 shipping. 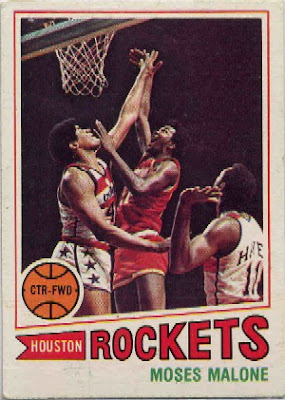 OK so Mr. Malone is not a Bullet on this card, so why did I get a Non-Bullet card? It won't be until 1986 that he gets traded to DC. My collecting criteria for Basketball cards includes players that at one time in their careers played for the Bullets (Wizards not so much). If that wasn't the reason then the short easy excuse could be there are some Bullets pictured with him by sheer coincidence it happens to be the Two Bullets I have featured here and have their cards of Mr. Unseld and Mr. Hayes. How frackin' cool is that? It was totally unintended and again it wasn't until I was preparing this post that I even noticed the fact.
Posted by CaptKirk42 at 11:00 AM