Went fishing on Ebay and got a few Charmed Autos from Inkworks. They are from a few different sets Charmed Destiny, Charmed Conversations, Charmed: Season One and Charmed:The Power Of Three set. They are supporting characters with the exception of Leo Wyatt played by Brian Krause that was the most expensive one. I got most of them for an average of a little under $3.00. I would love to get the autos of the Main stars the Halliwell Sisters but those are usually astronomical.

For the three I got from the same seller I thought I had been shilled. The opening bid for those three were just 99¢ (one of them might have been a little more). On all three of them the same bidder with a large feedback number had bid, but my max had them outbid. One of them a second person bid on it bringing the total number of bids up to 5. Now that I study the bid history and bid times it looks like that first bidder was trying to snipe me unsuccessfully. Probably a seller trying to get something for real cheap and then turn it around for an insanely inflated profit. They were 3 day auctions and the later bids were on the final day. Even if I was "shilled" I got them for nice prices so it is OK.

All of them are the sealed uncirculated case hits. I had mentioned one of these type of cards way back with my Non-Sport Autos post with Mimi Rogers as Diana Fowley from The X-Files Connections series. I hadn't mentioned the problem it has that it shares with two of these. The problem is that the gold seal covers up the character info on the back. SIGH! I guess that means I'll have to find some "regular" versions of these things and very rarely get these sealed ones. I will show the back of the Mimi Rogers card at the end of this post. I also need to mention a card I had gotten almost two weeks after that card (it is from the same series as the card I had mentioned along with the Mimi Rogers card). 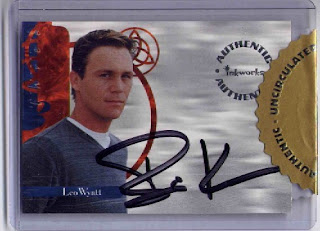 Due to the Back card design the huge gold "Razor Authentic Uncirculated" seal covers half of the character info. For some cards it covers up the character photo and the card number. 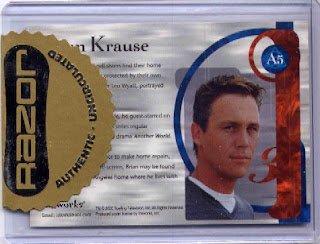 2003 Inkworks Charmed: The Power Of Three Auto A20 Michael Bailey Smith as Belthazor. This is one of the ones I thought I had been jipped on at first. I got it for $3.28 (2 bids) plus $3.50 combined shipping for 3 cards. 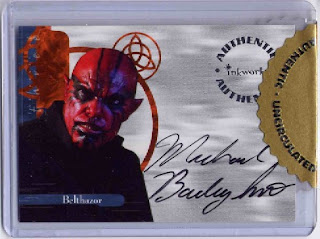 Again the great golden seal blocks half of the character info on the back. 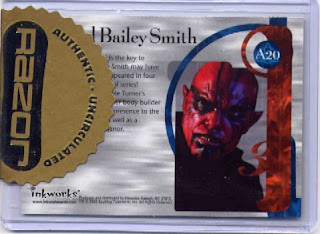 2005 Inkworks Charmed: Conversations Auto A8 Patrice Fisher as Avatar Beta. Got it for $1.51 with 2 bids plus the combined shipping. 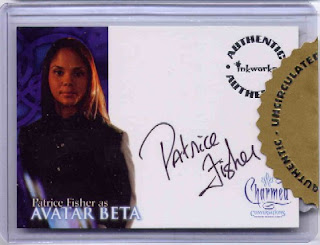 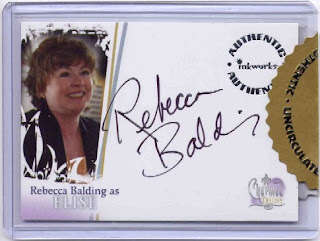 Auto A8 Gildart Jackson as Elder Gideon. Never been a huge fan of the character since he is a bit nasty. Anyway got this for $3.01 after 5 bids the combined shipping. 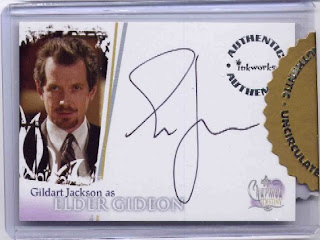 As mentioned above here is a card I had previously mentioned that has that back info being covered up by the giant gold seal problem.

2005 Inkworks The X-Files: Connections Auto A3 Mimi Rogers as Diana Fowley (back) 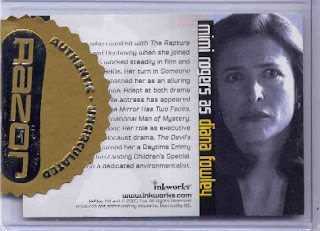 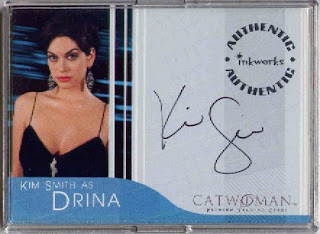