I have often said I'm not really into basketball especially now-a-days. I hardly follow it anymore. I used to follow it some as a kid when the Washington team was called the Bullets not Wizards and the uniforms were better fitting. The jerseys didn't hang down too low, and the shorts weren't super baggy like gaucho skirt-pants. The days before Michael Jordan and before star athletes had the attitudes they all seem to have now.

Anyway one of the Washington Bullets from when I was really a fan (as apposed to the collector "fan" that I am now) is Elvin Hayes. Here is a card of his I have already mentioned when I talked about having the completed 1975-76 Topps Bullets Team Set (link to the post Elvin is mentioned in at bottom) 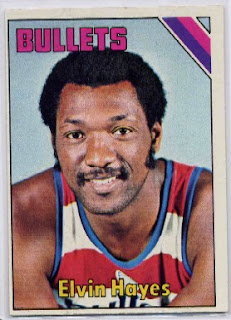 These next two cards are "Tall Boys". I used to get confused as to which one was in better (or worse) condition.  There is already a guy who blogs about Poor Old Baseball Cards and Football Cards he mainly collects just baseball but has a handful of football cards. Poor Old Basketball cards and Poor Old Hockey Cards need collector's love too.

I used to think this first of the two was in worse shape because it was older and had a rough life in my family's house over 30some years. It spent many years abandoned in dresser drawers, shoe boxes and the basement utility/storage room. Ironically it's the newer of the two cards that is in the poorer shape.

For the first Tall Boy (from when Elvin was on the San Diego Rockets) the corners are dinged and slightly rounded, there is light creasing especially near the bottom, the centering if off left/right by about 20/80? The centering on the back is a little better but still a tiny bit off. At first glance the card is not that bad looking. 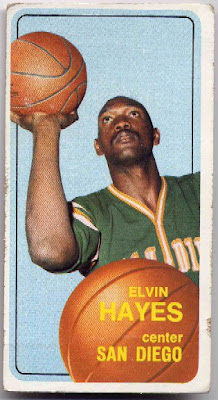 The centering on the back as I said is a bit better. The only reason I wanted to show the back is because of the cartoon. Oh I love the days when the backs of cards had some useful stats AND a cartoon about the player on the back. 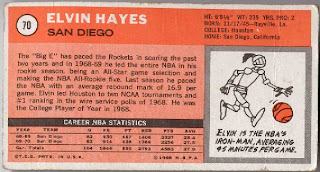 Now this next card. The corners are very rounded and fraying, there are several creases most seem to be mild to severe creases with the biggest one a vertical crease almost through the entire length. It almost looks like Elvin is being struck by lightening. 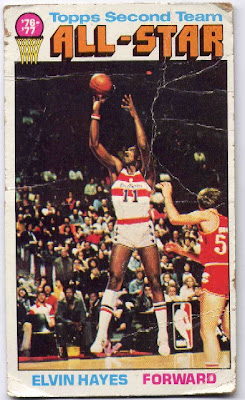 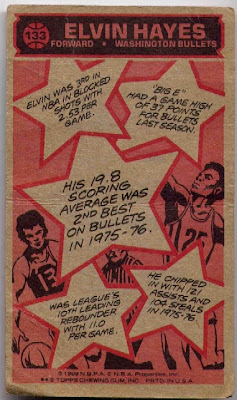 For nostalgic reasons (after composing this post) I started getting back into 1970s Bullets cards (and earlier) and maybe some of the key star players from other teams but only Pre-1980. That is partly why I've decided to talk about those Elvin Hayes cards and not get rid of them. The only basketball cards I will get from after 1980 are Bullets and maybe Wizards in their Washington Uniforms.