For the record I am not thrilled about graded cards. I think my main reason is it seemed to be originally developed as another way to rob the poor card collector out of his/her hard earned money. OK from a preservation stand point they are probably the best thing for cards, especially fragile perforated cards like stand-ups and sticker/stamp pages/strips, and also they insure authenticity, but from a practical stand point and a financial stand point they suck. They are expensive first for the cost of having the grading company do their thing of grading them and slabbing them, or "entombing" them as some collectors say. Also those who do sell the things try to squeeze out as much money from you as possible for them.

Here are some things I said about the reasons I had been avoiding getting graded stuff:

*I thought they are a pain to store, you have to keep them in separate areas from your ungraded cards due to the case they are in.

*The cost of sending your cards to a company to get graded vs. the grade they will come back as. etc..
*The confusion of which company to use. There are about a dozen companies and only 3 or 4 are worth using, depending on who you talk to.
*The distance between you and the card through the plastic tomb. It's like looking at your new born kid through the glass window at the hospital.

I still think that way about graded cards somewhat. Although now I won't ban them like I had before having any in hand. Of course there are techniques to "free" your card from it's "Tomb" some work better than others, I think probably the best way to do it without damaging the card is to use a flathead screwdriver and at the top where the paper label is wedge the screwdriver into the seam and then pry a little and then slide it along the edge like opening an envelope. I think you need to hit both top corners loose a little first. Anyway enough about how to free them you can find many videos on YouTube on how to do that.

OK so lets get to discussing the slabbed cards I've got OK.

This first one was the first graded card I ever received in May of 2009. I had never bought one and this one I didn't buy It was in a package from a fellow collector at TCC it was just a "Random Act of Cardness" (My own original saying) from the forum's "Time To Give Something Back!" thread. In the package I had received several other things including a boat-load of Marshall Faulk cards.

Anyway the graded card is a 1997 Topps Basketball Kevin Garnett Graded by FGS (Finest Grading Service) Gem Mint 10. Yowzers. (I jokingly said on the forum he was probably "some loser rookie guy.") I will either trade it for some high-value vintage, or try to sell it. 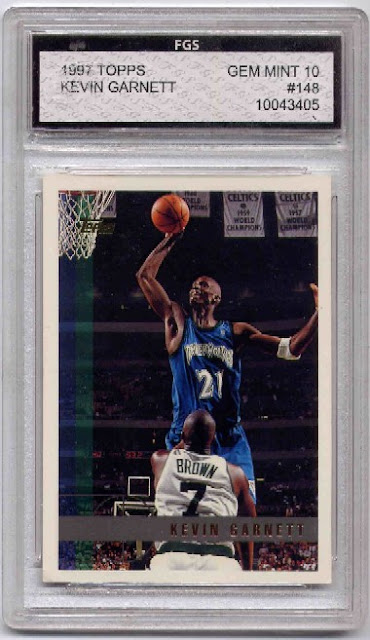 This next card also came from TCC a different user on 24 March 2011. This time from a post called "The Chain" where a package with an assortment of cards is sent around to collectors in a set order and upon receiving the package each collector chooses one card to keep, then replaces that card with a similar type of card and sends the package on to the next collector or "link" in the "chain". There is an option to add another card in a new category to make the selection more interesting. The big problem the experiment had is some people started sending big memorabilia and someone else sent a couple card sets all of which increased the size of the package to a medium flat-rate sized box thus increasing the postage necessary to send on to the next person. That is just a bit of a related tangent to this card, because this graded card was a special "bonus" that the collector who sent me the package sent specifically to me since he knew some of my tastes.

So the second graded card I have is a 2000 Fleer E-X football card # 54 Kurt Warner - Rams graded by Beckett Collectors Club Grading (BCCG) grade a 9 Near Mint or Better. 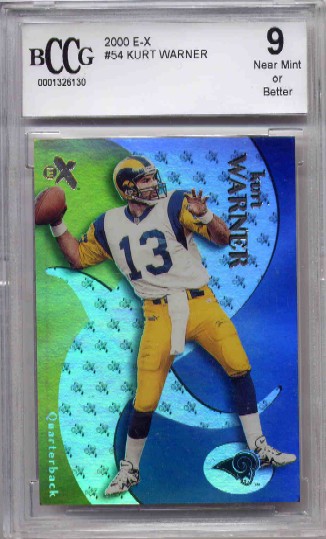 This final graded card was actually my first purchased graded card (received 15 December 2009 for $10.00), well it's more card plus memorabilia because it is a 1971 Milk Duds Baseball FULL BOX Frank Howard Washington Senators Professional Sports Authenticator (PSA) Graded EX-5 The Milk Duds set is unnumbered. Alphabetically this is card #9 (69 in the set)- PSA slab has it marked #1 - the # 1 on the box is for the box code not the card number as all the boxes seem to be numbered 1.

When I was a Kid I had some of the Milk Duds cards, I don't recall which ones. I probably got rid of them because they were "hand cut" and thus "destroyed", or my mom did the stereotypical "threw them out". She did that more so with my oldest brother. Little did I know back then, whenever that was, that I would later like to get some more of these in the Complete Box. Not necessarily graded versions. Due to prices of these things, especially the big stars I can't afford to get all of them in graded form.
Posted by CaptKirk42 at 12:00 PM