Not really a "filler" post, but rather a "spread them out" post due to an onslaught of auction wins from sportlots.com. This one came all on it's lonesome on 03 February 2012. The only bummer (which fortunately didn't matter much in this case) was it came in a PWE (Plain White Envelope) in just a cardsaver. I've ranted many times about these things and how they are not good for shipping cards in. They are OK for storing cards in or for displaying cards in but they suck for shipping. A few days later I received some cards (ironically some other 1968 cards) that were also in a PWE but they were first wrapped in plastic wrap and the plastic wrap taped to a piece of cardboard and then sandwiched between that piece of card board and another piece of cardboard. The two pieces of cardboard were taped together and then put in the PWE. That is a little bit safer. Anyway the card I got is this: 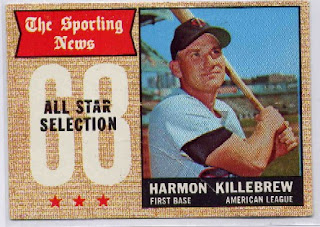 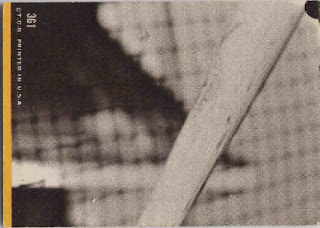 I'm not sure but I think this is the first 1968 Topps All-Star card I've had. I may have had a few as a kid but I don't recall and since my pre-teen/teen years when I really got back into the hobby seriously I don't recall having one, at one point I didn't like their look. As a kid I loved the puzzle backed cards, unfortunately I rarely had a full puzzle to enjoy, but putting the pieces I had together to see which ones I needed was fun. All the '68 All-Star cards had a puzzle piece on the back from one of two puzzles. This blog here 1968 Topps Baseball explains and shows the completed puzzles. Oddly enough at one time I was "anti-puzzle" probably because of the frustration of not having a complete puzzle to enjoy.

ON a different somewhat related to this card note: I am toying with the idea of making a Senators/Nationals specific card blog in the near future. Harmon "Killer" Killebrew was one of the Washington Senators who transitioned into an original Minnesota Twin when the team moved in '61. Most fans seem to remember him as a Twin rather than a Senator. I need to remind myself to link this post to that new blog whenever I get around to making it.