A Six Pack of Sports Books


When getting ready to do a review on a book I read now about 2 years ago (OK so I'm really behind in lots of things) for my personal non-card blog I realized I had a couple of old sports related books, then I thought of a couple of other sports books I had read within the last year or so. I decided to at least mention and show the books. OK so it's not card related but Its a fun sports thing.

The list started growing and next thing I know I had six sports related books I wanted to talk about. Then I realized that three of them were on Baseball and three of them Football. 3 of them are vintage books and 3 are more modern or new. One of the vintage ones I haven't read yet but the others I have read. I just haven't reviewed them yet.
Onto the books first the "Veterans":


The Year The Yankees Lost The Pennant
by Douglas Wallop 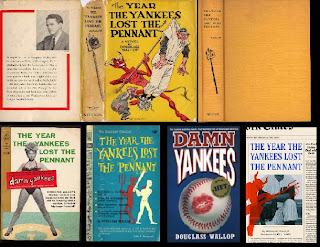 The Year The Yankees Lost The Pennant covers

In the above picture Top: Original Dust Jacket and actual spine/front cover of book. Bottom: various paperback covers over the years. Includes the more recent "Damn Yankees" cover (blue with kissed baseball from the 1994 revival).

The Year The Yankees Lost The Pennant was written in the mid 1950s when the New York Yankees were all but unstoppable and were the Kings of the baseball diamond. It was first published in 1954. The story is the typical "Faustian bargain" of making a deal with the devil. In this case a diehard Washington Senators fan Joe Boyd meets a Mr. Applegate (aka: the Devil) and makes a deal with him to get the Senators into the pennant race Applegate turns frumpy middle-aged Joe Boyd into young studly Joe Hardy the super player that the Senators need to pull them from the division cellar and put them on top of those "Damn Yankees".  Yes this is the book that inspired the Broadway musical "Damn Yankees".  Some of the later printings (Like the one with Gwen Verdon on the cover) have updated the year the story takes place from 1958 to 1964.
﻿

In 1955 when the musical "Damn Yankees" opened a special flyer was inserted onto (or a sticker put on) the book's dust jacket. I think these were only produced in May 1955 for the musical's opening (I haven't found any good info on this rare gem). Due to the rarity of this advertisement on the dustcover (which in themselves are somewhat of a rarity now) the copies with it on the cover are very expensive. I would love to get a copy of it, but I don't think I ever will due to the price.

The Jim Thorpe Story: America's Greatest Athlete by Gene Schoor. Is a truly fascinating biography of one of the greatest if not THE GREATEST all-around athletes of the 20th Century. Originally published in 1951 when Thorpe was still very much alive it ends on a happy note. He died in 1953. The copy I read and have pictured here is the 4th printing from 1969 but still maintains the original text so there is no mention of his death.

My Greatest Day in Football
by Murray Goodman and Leonard Lewin

My Greatest Day in Football by Murray Goodman and Leonard Lewin. Of the books I'm mentioning in this post this one I have not read yet. Originally printed in 1949 the copy I have at the back says it is a reprint that faithfully reprints the original 1949, but I have no idea when it actually was reprinted by Bantam Books my guess is about mid '50s up to maybe mid '60s. My copy is in pretty rough shape as you can see by the scan. The condition of the cover and the golden brown yellowing of the pages leads me to believe my copy is closer to the '50s than '60s. I am worried about trying to read it, just as I was worried when I read my copies of the two books above (The Jim Thorpe Story and The Year The Yankees Lost The Pennant)

Yogi Berra: Eternal Yankee by Allan Barra. I have never been a New York Yankees fan, but I have almost always had a soft spot for Yogi. This biography makes him even more likable and tells a lot of the Yogi stories that led to a famous Yogiisms. A "Yogiism" is a strange quote that is credited to Yogi as being something he said at one time. Like "It ain't over till it's over". As many baseball historian/fans know many of the sayings that have become a Yogiism are not necessarily what Yogi really said. "I didn't really say everything I said". Some of them he remembers saying and can verify others he said maybe likely that he said it or something similar that was twisted to become a Yogiism. I think there are more of the latter than the former. After reading this book I have more respect for the man and realize that his neanderthal image was just that. He really is quite an intelligent guy and over the years made some wise investments.

The Book of Deacon by Deacon Jones and John Klawitter. This book is a super quick read as it is just basically a book of collected quotes and zen-like sayings. No doubt many of the things in there are things that Decon Jones has said over the years, but a few are so common sense and logical that I have a feeling anybody could write them down in a collection like this and say they originally said them. It is a very enjoyable book.

Safe At Home: Confessions of a Baseball Fanatic
by Alyssa Milano

Safe at Home: Confessions of a Baseball Fanatic by Alyssa Milano. This book doubles as an autobiography and a guide to baseball history and slang for becoming a well versed baseball "fanatic". If you thought Alyssa was just a pretty face you are only half right. She may have same silly ideas and occasionally come off as being a California Air-Headed Girl she really knows her Baseball.

Scroogie by Tug McGraw and Mike White. In 1975 a fun comic strip hit the newspapers. I was going to make a separate post about this comic strip and book but when I started this post it seemed like a cool thing to add. Scroogie was written by baseball's Tug McGraw based on his career with the New York Mets and Philadelphia Phillies thus the name for the fictional team depicted in the strips the Pets.

Two books were published of the strips in 1976 and 1977. It seems that the second book is the rarer of the two rare books.

There is a second Scroogie book titled "Scroogie 2: Hello There, Ball!"  I don't have a copy but I would love to get one.

The image of the second Scroogie book I found on the webpage The Comic Treadmill. I have seen several sites make reference to it but they don't have a cover image.
Posted by CaptKirk42 at 12:00 PM