This is part one of two posts of some Vintage RamSkins (Rams + Redskins = RamSkins) I got nine cards on 03 February 2012 from one sportlots seller I have dealt with before OK lets get on with the roll call.

First Up Here's Johnny! John Carson, not the late late-night talk show host but rather the Washington Redskin End. 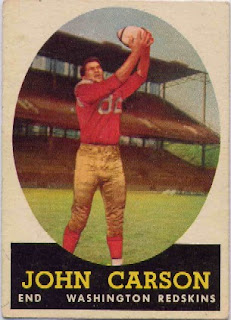 The cartoon on the back is hard to read. The answer to the question: "What is John Carson's nick-name?" - "Long John because he uses his height to catch passes". The cartoon shows a pirate reaching for a football pass. 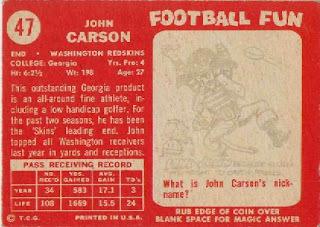 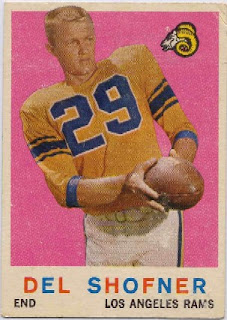 
The back's scratch off "Magic Answer" looks to be incomplete or it's an order for a Chinese restaurant. 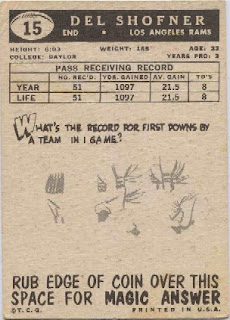 OK so at first this card doesn't seem to fit because the player is in a previous team's uniform The Pittsburgh Steelers. 1969 Topps 111 Roy Jefferson - Steelers. Roy became a Redskin in 1971. 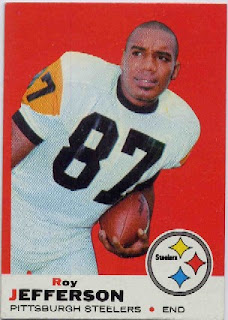 
This next player has a solid strong name for a Tackle Rock. 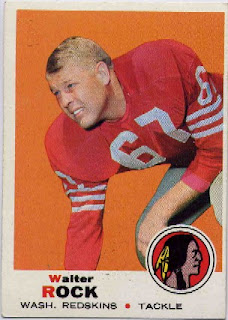 It's Rookie Time. From 1975 a player who would have his career cut short by a horrible leg injury Joe Theismann. Joe started his pro career in the CFL (Canadian Football League) on the Toronto Argonauts. Although this is Joe's Rookie Topps Card and Rookie NFL card it is not his TRUE Rookie card because he had a 1971 O-Pee-Chee Rookie Card when he debuted with the Argonauts. So Canadians are laughing at us silly American's thinking this is Joe's RC! 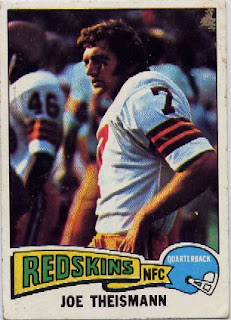 That does it for part one. The next post part two the conclusion is the Philadelphia Cards will be posted "tomorrow" in about two hours. Gotta love scheduled posting.
Posted by CaptKirk42 at 11:00 PM