OK so here is part 2 of my sportlots card onslaught for 03 February 2012. The Philadelphia Cards. I don't have much to say about these cards other than I like them and I don't want to go into the whole contract thing about Philadelphia Cards vs. Topps and the NFL vs. AFL and then the merge later on thing. Other blogs and card websites tell the story much better than I ever could. So just enjoy the cards.

First up is the only Redskin in this batch of four cards.EEK this card is as old as I am. 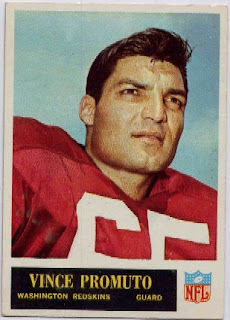 Next up a trio 1966 Philadelphia's. I like this particular year of Philly cards probably because the yellow banner at the top looks kind of like the vintage magazine covers from that era Like Sports Illustrated. OK so maybe not exactly, I'm not sure if any magazines from that era had a yellow (or some other color) banner at the top, but it looks like it should be on a magazine. One of my first cards from this set is Merlin Olsen's Card #102 (which I feature in my blog logo at top - or one of my blog logos if it currently is not featured) 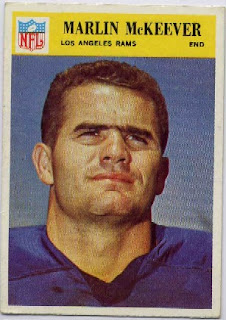 The odd and slightly annoying thing about these 1960s era Philadelphia cards is the "Guess Who?" questions on the back, the answers given are to a question on another card. I'm not sure how they determined which answer to put on which card they appear to be totally random. For instance this card's back (card 98) gives the answer for card number 42's question and the answer for this card's question is found on card number 154. A better way to do it is to put the answer on the next card, then that will leave one card without a question? Another way it has been done is to put the answer at the bottom of the card and upside down. 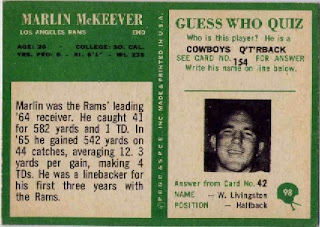 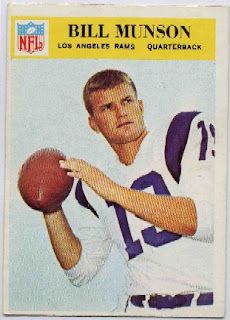 This next card is one of the Team Play cards which even though there are Rams in the picture, the card and the play is actually for the Minnesota Vikings. That year the card set was organized alphabetically by The Teams city, the card order was the Team card usually a team photo (1966 was the Atlanta Falcons first season so their team card featured the team logo), the featured players and an In Action Play card (again a team logo card for Atlanta). That is part of why I like many of the vintage years the cards were well organized. Now who knows what their reasons for the particular order they put the cards in is? The play on this card (from the game played 03 October 1965) gained a first down for Fullback Bill Brown despite Merlin Olsen's efforts spoiled by Larry Bowie. 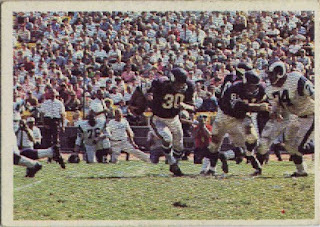 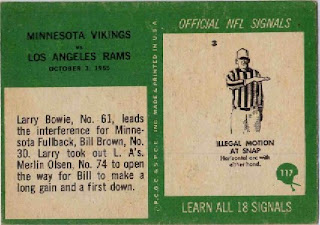