From the 11 FEB 2012 sportlots onslaught. We hit the ice and go back to 1969-70 Canada, sort of these are the O-Pee-Chee versions. One thing I've notice with this particular year is it seems that all the player's photos were taken in hallways or some corner of the locker room. The walls you can see are plain painted cinder block walls. I don't know much about the guys from this era of Hockey since I was just a little tyke at the time and it would be another 4 years or so before I became a hockey fan because the Capitals were not in existence yet. I think I was a semi Bruins fan because of Bobby Orr and the Phil and Tony Esposito Hockey game we had. I used to think both Esposito brothers played for the Bruins but it looks like that was only Phil. Back then I thought Tony was the one on the Bruins. On with the Cards: 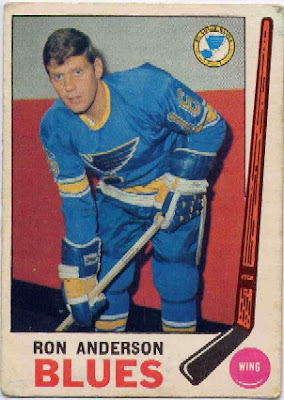 Here is a nice card of an Anderson. I tend to collect players with that name because it is similar to my last name Andersen. OK so technically its the same name but spelled different. The origin of the name means "Son of Ander" no matter how you spell it or where you come from even if you add a couple of "S"s. 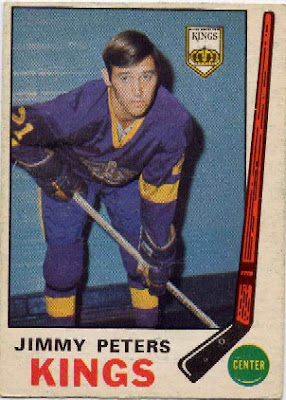 This card is almost a mirror image of the other card if you squint and are blue/red color blind. A typical posed photo of the player holding his stick down. I wonder if they were actually in their skates when these photos were taken? As I said the walls of the room are plain so they could have been taken while the players were suiting up. Yeah I'll keep thinking that. 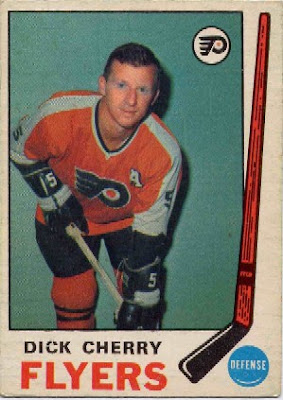 My first reaction to this card was Dick Cherry - I wonder if he is related to Don Cherry? (Player/Coach best known for coaching the Bruins) The answer is YES he is related they are brothers. Thank you Wikipedia. Again we have a player in a typical pose with his stick "on the ice". Only there is no ice here. 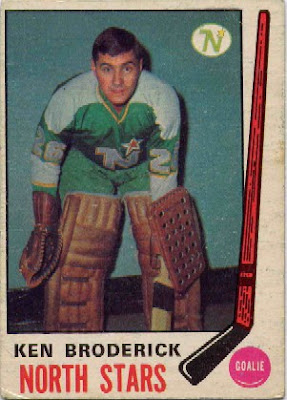 This is why I kind of dig vintage cards of goalies. Check out the huge leather pads, OK so modern pads are still huge but they use foam and nylon and plastic and simulated leather now. This Mr. Broderick is no relation to the Actor Matthew. 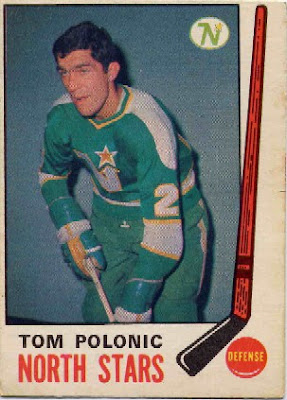 We got another North Star here and another faux "stick on the ice" pose. I bet he doesn't even have his skates on.
Posted by CaptKirk42 at 12:00 PM